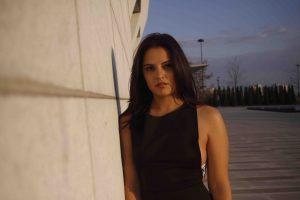 (July 14, 2017 – Toronto, ON) – Kiki Rowe announced today the release of a new music video for her latest single “Come My Way,” featuring Khalil.  The single, which is available to stream now on all major media providers, is the follow-up to Kiki’s debut single “Trust Issues,” produced by DJ Mustard.

On the track, produced by Blaq Tuxedo (Selena Gomez, Chris Brown), Kiki displays her blend of vibey R&B and slick pop beats. The songwriter has teamed up with R&B tastemaker artist Khalil on the latest single, who also appears in the new music video produced by Aaron A (Majid Jordan, Alessia Cara).

In October 2014 Kiki released her first self-titled EP, which featured collaborations with the likes of DJ Mustard, ASTR and Ivan Barias. Since her debut, Kiki has received critical acclaim and recognition as ‘One To Watch’ by Toronto Star and Toronto Life. Her music has been featured on Billboard, Complex, Fader and many more.

Kiki’s latest single “Come My Way” is available to stream now and more information on Kiki and future releases can be found on her official website.