CERTIFIED 2X PLATINUM BY RIAA AND 3X PLATINUM IN CANADA 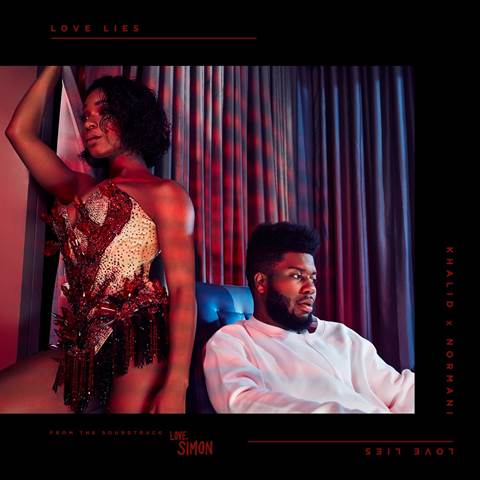 (Los Angeles, CA)— Today, Khalid & Normani’s hit single “Love Lies” hit #1 at U.S.Top 40 Radio, according to Mediabase and #1 on the Billboard Mainstream Top 40 airplay chart, and has been certified 2x Platinum by the RIAA. In Canada, “Love Lies” is certified 3x Platinum and is currently #4 on CHR Radio. Since its release, the track by the platinum-selling singer-songwriters has seen massive success. Having been streamed over 382 million streams on Spotify alone, the RCA Records hit broke the Top 5 on the streaming platform’s US (#2) and Global (#3) Viral Charts. Featured as Zane Lowe’s World Record, “Love Lies” also went #2 on iTunes’ R&B/Soul Top Songs chart and #9 on the Top Songs chart across all genres. It has also been streamed over 603 million times worldwide while the song’s official video has over 128 million video views worldwide. In addition, Khalid & Normani performed the duet on the 2018 Billboard Music Awards. Billboard stated that Khalid “ignited their performance with a captivating opening verse” and said Normani “cranked up the intensity.” The FADER declared the entire performance was “stellar” while BuzzFeed exclaimed that they “shut the BBMAs down!” Click HERE to watch. They also recently won a 2018 Teen Choice Award for Choice R&B/Hip-Hop Song for the song.

“Love Lies” is featured on the soundtrack for the 20th Century Fox film, Love, Simon which was released by RCA Records. This is the 1st #1 U.S. Pop Airplay record from a soundtrack in over 2 years dating back to June 2016 when Justin Timberlake’s “Can’t Stop The Feeling” from the Trolls Original Motion Picture Soundtrack hit the top, also on RCA Records.

Five-time Grammy® nominated artist Khalid has seen great success since he released his first single “Location” right before his high school graduation. The song’s domination led to Khalid’s major label deal with Right Hand Music Group/RCA Records followed by the release of his debut album American Teen. The album received mass critical acclaim with Rolling Stone calling Khalid a “pop prodigy” and TIME Magazine stating, ““His thoughtful, relatable reflections on modern youth culture and the limitations of love are just as pitch-perfect as his soulful, measured delivery.” American Teen shattered expectations, as it stayed in the U.S. Top 200 for 51 weeks, peaked at #4, and stayed in the Top 20 for 48 out of the 51 weeks it was in the Top 200. In Canada, it has been in the Top 200 album chart for 80 weeks, peaked at #7 and is currently #28.  The singer-songwriter has over one billion streams worldwide across all partners, his first single “Location” is certified 4x Platinum by the RIAA (4x Platinum by Music Canada), and his previous single “Young Dumb & Broke” is certified 3X Platinum by the RIAA (4x Platinum by Music Canada). Since the album’s debut, Khalid has garnered five 2018 Grammy® nominations including Best New Artist and landed on the cover of Billboard’s 2018 Grammy® Preview issue. He recently won two 2018 Teen Choice Awards for Choice Breakout Artist and Choice R&B/Hip-Hop Song for “Love Lies” with Normani. He was also nominated for 2017 BET Award for Best New Artist, a 2017 Teen Choice Award for Choice R&B/Hip-Hop Song for “Location”, and a 2017 American Music Award for Favorite Song-Soul/R&B for “Location.” Khalid also won Top New Artist at the 2018 Billboard Music Awards, Best New Artist at the 2017 MTV Video Music Awards and an MTV’s Woodie To Watch Award. In addition to American Teen, Khalid has collaborated with some of music’s biggest stars. He has been featured on a number of songs including mega hits like Calvin Harris’s “Rollin” with Future, “1-800-273-8255” with Logic and Alessia Cara, “Silence” with Marshmello, “Lovely” with Billie Eilish, “Youth” with Shawn Mendes, and many more. Khalid’s current singles “Love Lies”, a duet with Normani, and “OTW” featuring Ty Dolla $ign and 6lack are burning up the airwaves. Khalid recently wrapped up his third sold-out North American headlining tour.

Best-known as one of the four members in the multi-platinum group Fifth Harmony, Normani explores a new musical direction on “Love Lies” with Khalid. Since its release, the “slow-burning R&B ballad” (The FADER) has been streamed over 603 million times while the song’s official video has over 73 million views on YouTube alone. With over 387 million streams on Spotify alone, the song broke the Top 5 on the streaming platform’s US (#2) and Global (#3) Viral Charts. Featured as Zane Lowe’s World Record, “Love Lies” also went #1 in Canada on iTunes’ R&B/Soul Top Songs chart (#2 in the U.S.) and  #8 on the Top Songs chart across all genres (#9 in the U.S.). “Love Lies” is currently #1 at Top 40 Radio in the US and #11 on Billboard Hot 100.

Born in Atlanta, Normani grew up in New Orleans before moving to Houston at 9 years old with her family after Hurricane Katrina.  Always excited about music, Normani began dancing at the age of 3 and grew up idolizing entertainers like Janet Jackson, Michael Jackson, and Beyonce.  Inspired by her love for pop and R&B, “Love Lies” offers a closer look to Normani’s personal style as an artist and demonstrates her “smooth vocals” (Billboard) and “velvety range” (Vulture). Outside of the recording studio, Normani is the Global Ambassador to the American Cancer Society and works with A Place Called Home, lending her name and time to various events. She is also a Diversity Ambassador for The CyberSmile Foundation, a multi-award winning anti cyberbullying non-profit organization.

To Buy or Stream “Love Lies”: