New Song Included in New Feature Film On the Basis of Sex, Inspired by a Young Ruth Bader Ginsburg 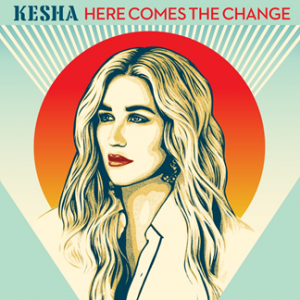 (September 19, 2018) – Today, Kesha releases “Here Comes The Change,” an acoustic guitar-led rallying cry of empowerment, featured in the upcoming Participant Media film On the Basis of Sex, opening December 25 (limited) in association with Alibaba Pictures and distributed by Focus Features.

With lyrics (written by Kesha with Drew Pearson and Wrabel specifically for the film) that meditate on the battle for universal equality combined with Kesha’s wildly passionate vocal delivery (a highlight of her GRAMMY-nominated latest album ‘Rainbow’), “Here Comes The Change” echoes the sentiments of the film which tells an inspiring and spirited story that follows young lawyer Ruth Bader Ginsburg as she teams with her husband Marty to bring a groundbreaking case before the U.S. Court of Appeals and overturn a century of gender discrimination. The feature will premiere in 2018 in line with Justice Ginsburg’s 25th anniversary on the Supreme Court.

Moved by the power of the song and the film, renowned artist and social activist Shepard Fairey created the single art for “Here Comes The Change.” Kesha also joined forces with non-profit organization HeadCount on the lyric video to encourage fans to vote. Watch here: http://smarturl.it/HereComesTheChange/youtube

In an essay for Refinery 29, Kesha wrote about the message of equality and empowerment echoed in both the film and her new song, saying “Together we can prove to our leaders and the rest of the world that we will not tolerate challenges to equality and freedom in our country.” Read here: https://www.refinery29.com/en-us/2018/09/208707/kesha-young-voters-change-midterm-elections-essay

“I greatly admire Kesha’s artistry and commitment to activism,” said Mimi Leder, director of On the Basis of Sex. “I wanted her to write this song because her passionate voice and immense talent magnify the social justice imperatives Ruth Bader Ginsburg continues to fight for every day. It was important to both of us that this song be not only an anthem to all that Ruth Bader Ginsburg achieved, but also a rallying cry for how much more change is yet to come.”

ABOUT KESHA: Kesha’s latest album Rainbow, debuted at #1 on the Billboard 200 chart in the US as well as #1 on Nielsen Soundscan in Canada, was called “an artistic feat” by Entertainment Weekly and “the best music of her career” by Rolling Stone, and earned the singer/songwriter the first GRAMMY Award nominations of her career at this year’s ceremony where she also performed the nominated single “Praying.” This year she was also named one of Time Magazine’s Time 100, their most influential people in the world, just wrapped a nine-week, 30-market co-headlining tour with Macklemore, and also just released the behind-the-scenes documentary ‘Rainbow – The Film’ on Apple Music (produced by Magic Seeds Productions) which she directed along with her brother Lagan Sebert and Kevin Hayden.