Kesha has dropped both the song and video for “My Own Dance,” the latest release from her upcoming album High Road (out Jan 10 on Kemosabe/RCA Records), and it continues the wave of addictively fun and perfectly crafted pop started by the album’s first single “Raising Hell” (feat. Big Freedia).

“My Own Dance,” written by Kesha with John Hill, Justin Tranter and Dan Reynolds (produced by Kesha and John Hill), uses irreverently brilliant witticisms to address reconciling the many facets of who you are, embracing your multitudes and learning how to create your own unique dance through life — and with lines like “the Internet called and it wants you back, but could you kinda rap and not be so sad?” Kesha playfully holds a mirror up to her own musical evolution as well.

The video, directed by Allie Avital, is quintessential Kesha, with the popstar going on an absurdist jaunt through the world’s craziest apartment complex in search of a box of “magic cereal.” The video is colorful, choreographed and complete with rooms of partying men in masks, solo cups, bodybuilders, lingerie-clad dancers wearing animal heads and gasmasks, two blank-faced young girls giving major “The Shining” vibes, and a kiddie pool full of milk & cereal.

“My Own Dance” follows the universal acclaim laid upon “Raising Hell” (feat. Big Freedia) which NPR called “a gospel-inspired rave-up banger”, Entertainment Weekly said “exorcises trauma, resurrects pop”, and Paper praised saying it “finds a wonderful midpoint between snarling party girl Kesha half-rapping over crunchy pop-EDM and her soulful balladry on Rainbow.” Kesha and Big Freedia recently performed the song on Jimmy Kimmel Live! and they will join forces again on Sunday, November 24th when they take the stage at the American Music Awards. 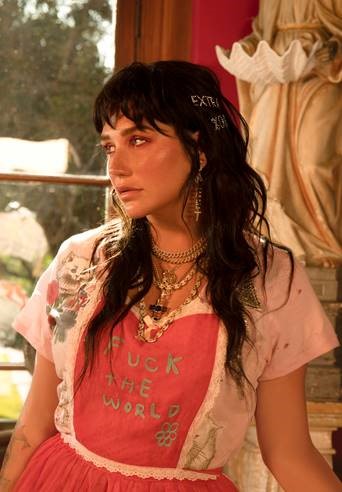