SINGLE AVAILABLE TODAY THROUGH ALL STREAMING AND DIGITAL PLATFORMS; GET THE TRACK HERE 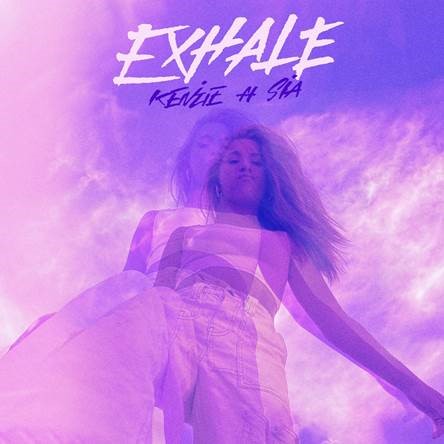 With an irresistible pop melody and catchy lyrics, “EXHALE” is the anthem of the summer. The single pushes kenzie’s boundaries as an artist and is an upbeat reminder to listeners to release their pressures and stresses.

“EXHALE” is kenzie’s third release with Arista Records since signing with the label in July 2019. The track follows the releases of her singles “HOT” and “MOTIVES.”

In November 2018 kenzie released her album Phases, which featured the singles “Nothing on Us” and “Wonderful,” written by Sia and Jesse Shatkin. Prior to Phases, kenzie recorded “Day & Night” with Johnny Orlando. In 2017 she released the single “Monsters (aka Haters)” and followed this success with her singles “Teamwork,” “Breathe” and “What If.”

At just 16 years old, kenzie has become one of the most influential rising stars of Generation Z. She has made a splash in the entertainment industry garnering a massive social media presence of over 30 million followers across several platforms, and her music videos have collectively received over 200 million views.

About Sia:
Sia’s current single, “Together,” is from her forthcoming album and motion picture Music due out later this year. Last year she partnered with Diplo and Labrinth to form the group LSD. Their debut album, Labrinth, Sia & Diplo Present… LSD has 1 Billion + streams to date. She released the Grammy-nominated This Is Acting (Monkey Puzzle/RCA Records) in 2016 to much critical acclaim and cemented her role as one of today’s biggest stars and sought after live performers with her Nostalgic for the Present sold-out headline tour. She has more videos in YouTube’s “Billion Views Club” than any other female on the planet. Her massive single “Cheap Thrills” was a multi-format global radio hit and was one of the longest running singles at Top 40 of 2016. Along with her own successes, Sia has also written global smashes for today’s biggest acts including Beyonce, Kanye West, Rihanna, Britney Spears, Katy Perry, and many more.