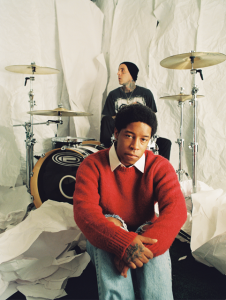 “What KennyHoopla and Travis Barker have crafted here is a sonic passing of the baton, from one generation to the next.” – ONES TO WATCH

November 25, 2020 – NEW YORK, NY – Today, pathbreaking alternative artist KennyHoopla and legendary musician/songwriter/producer, Travis Barker of Blink-182 star together in the official music video for their pop-punk throwback track, “ESTELLA//”. A genuine fan of Kenny’s, Travis reached out over Instagram to write together, and soon after, they wrote “ESTELLA//” in Los Angeles, CA. The explosive new video features Travis on the drums and Kenny giving an electrifying performance while showcasing his signature backflip.

“ESTELLA//” featuring Travis Barker follows a new version of Kenny’s single “lost cause//” featuring Jesse Rutherford of The Neighbourhood, as well as an alternate version with Canadian-American alternative artist, Grandson. Over the summer, Kenny shared live performance videos from his debut EP, how will i rest in peace if I’m buried by a highway?//, including videos for “dust//”, and “thinkingoutloud//”. He also participated in the Fader’s Digital Fort, and the performance for his EP title track has crossed over one million views on YouTube. Watch his riveting set HERE.

Born in Cleveland and currently based in Wisconsin, KennyHoopla is one of the most exciting rising artists in the alternative space today. HYPEBEAST proclaimed that he is “undoubtedly one of the most important indie up-and-comers in the United States right now.” His how will i rest in peace if I’m buried by a highway?// EP title track landed at #8 at Alternative Radio with adds across major markets and SiriusXM’s Alt Nation, and was added to the BBC 6 Music playlist in the U.K. The track was featured on the Fader, and was BBC Radio 1’s Tune of the Week. To date, KennyHoopla has been critically praised by tastemakers such as Fader, Complex, Pigeons & Planes, Consequence of Sound, NME and more.

KennyHoopla is set to support Yungblud on select UK dates next spring. He will join You Me At Six on tour next year as well, and is a confirmed performer for the 2021 Riot Fest in Chicago.

“I loved Kenny’s music from the moment I heard it and showed everyone it. We connected and kept talking about working together. ‘Bout a month ago we got in the studio for a few hrs and it was magic. That’s when we wrote ESTELLA, rest is history.” 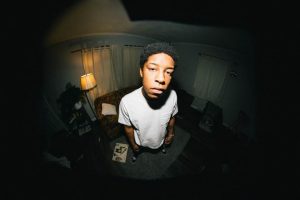