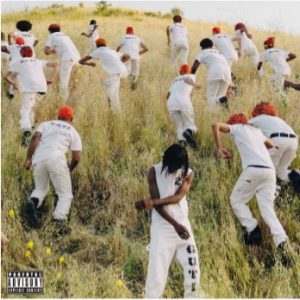 TORONTO, ON – June 3, 2022 – KayCyy has become a rising star in and beyond his Kenyan/Minnesota hometown with his inflective sound, and vibrant storytelling. Today, the 24-year-old continues his hot streak of immersive bangers with his new EP GUTI (Get Used To It) out today via Columbia Records; listen here. Featuring some star-studded appearances from Lancey Foux, 070 Shake, and Annahstasia, alongside a new music video for infectious track, Replay, GUTI brings KayCyy’s vivid imagistic memories and free-associative flexes to fruition.

Described as a declaration for himself, his loyal fans, and his new fans, GUTI is a long time coming. KayCyy has been teasing the project in interviews and online for a while now, leading fans to speculate about what’s to come, and given KayCyy’s new sound and energy, it isn’t hard to see why. Fans got their first glimpse of GUTI when KayCyy released Borrow, his energetic offering that received recognition from Lyrical Lemonade, Our Generation, HNHH, Daily Chiefers and more. Now that GUTI is out, it only adds to the lengthy legacy KayCyy has created for himself.

For years now, KayCyy has helped define a critical era of hip hop making a business out of vibes. KayCyy first left his mark as a producer, kicking off his career working with BuVision executive Abou “Bu” Thiam. With his backing, KayCyy landed multiple high-profile features and writing credits on massive singles like Lil Wayne (Funeral) and eventually became a GRAMMY Award winning producer making multiple contributions to Ye’s Donda (Flew By You) – all the while establishing himself as a successful rapper in his own right with his solo critically acclaimed mixtape Ups & Downs and TW20 50, a collaboration with legendary producer Gessafelstein.

With Ye adopting him as a member of his new YZY SND label, KayCyy looks to the future. Part of that will, of course include the music, which plays as a reintroduction laced with all the inventive, melodious stylings he’s known for. Stay tuned for much more from KayCyy this summer including his debut performances at Rolling Loud Miami & Lollapalooza.