KAT & ALEX RELEASE ‘SIDE A’ OF THEIR SELF-TITLED EP TODAY

KAT & ALEX RELEASE SIDE A OF THEIR SELF-TITLED EP TODAY

THE COUNTRY-LATIN DUO ANNOUNCED AN ENTIRELY SPANISH VERSION OF THE EP, LADO B, ARRIVING SEPT. 30 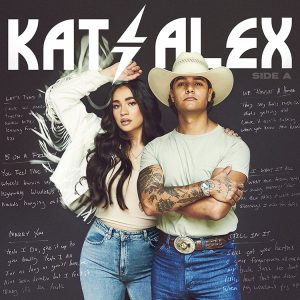 Growing up, Kat & Alex recalled seeing ‘Lado A’ and ‘Lado B’ (translation: ‘Side A’ and ‘Side B’) on their parents’ records. The duo has made it their mission to share music that reaches and celebrates a diverse and expansive audience including Spanish speakers like themselves, so with their debut EP, they decided to release an entirely Spanish version as well. In celebration of the kickoff of Hispanic Heritage Month, the couple announced that they’ll be releasing Lado B on September 30. Pre-order/add/save here.

“Sonically, the project is a melting pot…introducing two different worlds,” Kat & Alex said. “You’ll hear country, which is the root of it, as well as some rock, soul and pop. The common theme of the music though is love, which is purposeful because our relationship is full of love and it’s the core of everything we do.”

“Our mission is to show that there’s an audience of Spanish speakers that love country music. It’s not just for one group of people, it can be shared and created by anyone. If you love it, you can make it,” Kat & Alex said.

Kat & Alex co-wrote every track on the project aside from “Marry You,” which was written by labelmate Maren Morris along with Busbee. “When we heard this song, we felt like this it told our story, which was really cool because it was Maren’s song to her husband, Ryan Hurd. We reimagined it as a duet and added a bit of Latin drums to make it our own.”

Recently singled out as an Emerging Latin Artist to Discover by Billboard and named a CMT Listen Up artist for 2022, Kat & Alex are “well on their way to stardom” (People Magazine) and continue to establish themselves as Nashville’s most compelling outliers. 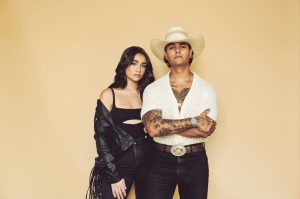 For as much as Kat & Alex embody classic country stylings and values, the Nashville-based duo also rewrite the rules altogether with a Latin twist. The husband-and-wife pair shake up country with full-bodied soulful delivery, engaging live instrumentation, and bilingual lyrics, introducing themselves as Nashville’s most compelling outliers. Kat is a Miami native and first-generation American from a Cuban family. Alex, who is of Puerto Rican descent, grew up in Northwestern Georgia and moved to Miami by middle school. Their paths crossed after Kat witnessed Alex singing one day at their church, and the two quickly forged an eternal bond after meeting up to collaborate. They appeared on American Idol individually before returning home to focus on writing and recording original music as a duo, and then made their way to Nashville in 2020, igniting a life-altering couple of years. Kat & Alex released their debut single “How Many Times” and its accompanying Spanish version in the fall of 2020, which amassed nearly 20 million streams independently. The following year the couple tied the knot, made their Grand Ole Opry debut, and released several new tracks to critical acclaim including “Heartbreak Tour,” which The New York Times dubbed as “an earnest power country slow-burner.” Named a 2022 Artist to Watch by Sounds Like Nashville and Country Now as well as a CMT “Listen Up” artist, the duo continues to make waves with their scorching signature style while resolutely representing Hispanic culture in country music with a sound that’s rich and soulful with velvet harmonies, pop-like vocal riffs, and hooky lyrics. Their latest releases, “Let’s Find A Bar” along with its Spanish version, “Tomemos Un Trago,” and “We Bought A House” along with it’s Spanish version “Mi Casa,” set the tone of what’s to come later this year for the country music trailblazers.