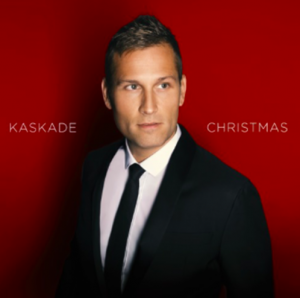 Ahead of the album’s release next week, starting today fans can hear “Deck The Halls” (feat. Erika) HERE. Aditionally, Kaskade contributes vocals to two tracks on the album, “Cold December” and “Winter Wonderland”.

“I’ve always loved Christmas music dating back to my days as a child going to church with my family,” said Kaskade. “All these years later, I’ve been able to put my own collection of Holiday music together and am really excited to have it out this season. I love the challenge of taking music that I have grown up with and producing it in a way that is new and modern.”

Kaskade added: “To add my imprint to classic songs is fun for me, and my die-hard fans will be familiar with the ways I make them my own.  Some of the songs are huge departures from the original style, while others stick within the main framework.  Add that to a few originals and…I am really proud of what I have created here. Christmas is fun… so is the music, and I’m here to bust up all the preconceived notions about what it should sound like. The mood of the season is about imagination, hope and love. This is for everyone, regardless of what you believe.”

Kaskade is about to wrap up  a handful of Redux tour dates. He recently announced that he will close out the year with special shows at The Bill Graham Civic Auditorium in San Francisco, CA. This will mark his second New Year’s Eve show at the venue. Tickets for both dates are available at www.kaskademusic.com. See below for a complete list of upcoming dates.

Earlier this fall Kaskade released Redux EP 002 on his own label, Arkade. The seven-song set is now available to stream and download in its entirety HERE. Redux EP 002 is centered around Kaskade’s intimate Redux shows, an homage to the stripped down clubs and deeper House Music played from the time his career was beginning. It kicks off with the lead single “Nobody Like You.” The EP also features contributions from LöKii, Mr. Tape, and Late Night Alumni.

Following the success of Kaskade’s history making performance last summer at the Los Angeles Convention Center (which sold out in record time, was the biggest solo headlining show of his career and was attended by nearly 25,000 people), Kaskade returned to Southern California this past July to bring his fans another unforgettable experience via a massive outdoor beach party in Long Beach called Sun Soaked. The beach side three hour plus performance featured material spanning Kaskade’s career. Billboard proclaimed: “Kaskade cements west coast legacy with Sun Soaked party debut.”

About Kaskade
Kaskade is a Multi GRAMMY Award-nominated musician who has been a groundbreaking innovator in the dance music world, and a titan in the music industry as a whole. While bridging the gap between old school music purists and a new generation of music lovers, he marries genres and twists labels to stay true to his roots while pushing the boundaries of what’s next. Relentlessly touring the world and playing to tens of millions of people around the globe, Kaskade has been in the trenches for over a decade. His handwriting can be read all over the history of electronic music while his influence maintains an all-time high.