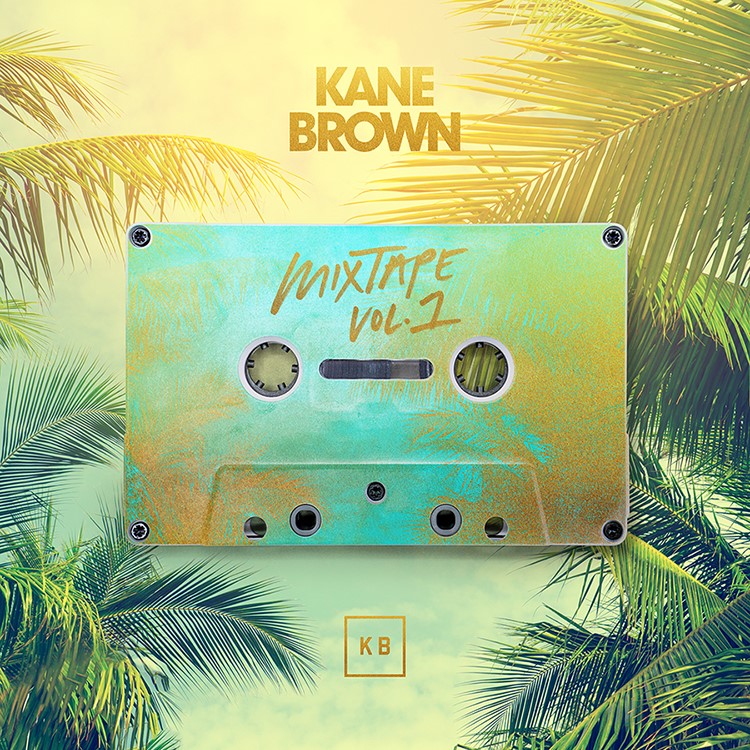 This Friday, August 14, 4X AMA winner Kane Brown will delight fans with the release of his seven-song collection entitled Mixtape Vol. 1 on RCA Nashville/Zone 4. Pre-save/pre-add to have it added to your music library on 8/14 HERE.

The new EP includes four critically-acclaimed tracks that Brown has released since the start of 2020, along with three previously unreleased songs. Kane Brown co-wrote each selection on Mixtape Vol. 1, his first multi-song project since his Platinum-certified Billboard 200 chart-topping Experiment (Gold in Canada) arrived in November 2018. Earlier today, the EP title and track listing were announced on ACM and CMA Award winning national syndicated radio program “The Bobby Bones Show.”

The 26-year-old singer-songwriter’s EP leads with his two current singles, the Top 10-and-climbing country smash, “Cool Again,” and Brown’s recently-released Top 40 hit, “Be Like That,” a collaboration with Swae Lee and Khalid. “Cool Again,” which Billboard named “song of the summer,” was the most-added country song its initial week of release with a career-high 103 stations onboard, and has become Brown’s fastest rising single to date. And further increasing his career benchmarks, the entertainer achieved his biggest first week launch at Top 40 Radio when “Be Like That” was No. 1 most added with 103 stations.

Also included on the seven-song set which exemplifies Brown’s “willingness to stretch boundaries and highly personal storytelling” (TIME) is his duet with John Legend, “Last Time I Say Sorry.” Of the song the two co-wrote, People commented, “John Legend and Kane Brown are a musical force to be reckoned with.” In April, shortly after the track’s release, Brown and Legend made their national television performance debut of “Last Time I Say Sorry” on the CBS primetime special, “ACM Presents: Our Country.”

The Mixtape Vol. 1 selection “Worldwide Beautiful” was originally released on June 4, two days after the music industry’s sector-wide Blackout Tuesday. The ballad echoed with a message of acceptance and global peace, and it benefits Boys and Girls Club of America to advocate for justice and equality. Brown made the national television debut of “Worldwide Beautiful” at the 2020 BET Awards alongside Grammy-nominated gospel singer, Jonathan McReynolds.

“Worship You,” “BFE” and “Didn’t Know What Love Was” round out Kane Brown’s new EP. The three new tracks offer another glimpse into the global entertainer’s singularly progressive sound and style, which Rolling Stone recently praised as a balance of “pop-leaning radio country, Randy Travis-inspired Nineties stylings, and pop-dominant R&B,” as he continues to shape the next generation of country music.
KANE BROWN’S MIXTAPE VOL. 1 TRACK LISTING:

Global entertainer Kane Brown has been called “the future of country” (Billboard), “Breakthrough Artist of the Year” in 2018 (Associated Press) and one of “31 People Changing the South” (Time). With the chart-topping Billboard 200 release Experiment in Nov. 2018, Brown became the only male country artist in more than 24 years to have his sophomore album debut at the top of this chart. Experiment has yielded three consecutive No. 1 Platinum-certified singles, “Homesick,” “Good As You” and “Lose It.” Brown made history with his 2X Platinum self-titled debut album, a 13-week No. 1 on the Billboard Top Country Albums chart. He became the first artist to top all five Billboard Country Charts simultaneously with his breakthrough No. 1 Top Country Album; No. 1 debuting Country Digital Song, the 5X Platinum “Heaven,” and No. 1 Country Airplay, Hot Country Song and Country Streaming Song, the 5X Platinum “What Ifs” featuring Lauren Alaina. The ACM, AMA, People’s Choice, Billboard, AMA, iHeartRadio, CMT and Billboard Music Awards nominated artist is one of only five country acts with multiple 5X Platinum hits (joining Luke Bryan, Florida Georgia Line, Sam Hunt and Taylor Swift). His two 5X Platinum songs are “Heaven” and “What Ifs” which, respectively, are the No. 3 and No. 5 most-streamed country tracks of all time in the U.S. – making him the only artist to have two tracks in the Top 5 of country’s most-streamed songs, according to Nielsen’s Country On-Demand Streams Chart. On January 9, Brown accomplished a milestone by becoming one of only 11 country artists who have sold-out the Staples Center in Los Angeles, when he headlined the historic venue’s 20th anniversary celebration. Among Kane Brown’s multiple musical collaborations, Marshmello and Brown’s Platinum-certified (5X Platinum in Canada) “One Thing Right,” became a Top 15 hit at Top 40 radio which also crossed to Hot AC in 2019, becoming Brown’s first multi-format breakthrough.