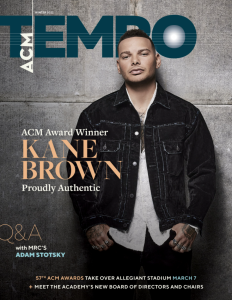 January 14, 2022– Multi-Platinum 5X AMA award-winning entertainer Kane Brown today released “Whiskey Sour.” The new track is off of his forthcoming album and the follow up to his current Top 10 hit “One Mississippi” and Platinum multi-week No. 1 “Famous Friends” with Chris Young. With “Whiskey Sour,” Brown adds co-producer to his resume for the first time, working alongside Ilya Toshinskiy. The track was co-written by Jaxson Free, Josh Hoge, and Adam Craig and features Brown’s signature stand-out vocal. In addition to the track, Brown also released the song’s music video, which features Runaway June’s Natalie Stovall playing fiddle alongside Brown. Listen here and watch the video here.

Recently named one of Time100’s most influential people in the world, Brown also graces the cover of the Academy of Country Music’s newly released ACM TEMPO Magazine Winter Issue. Earlier this month, Brown opened up to Men’s Health for their January/February Issue, sharing how he stays active and fit while on the road.

After playing to a sold-out crowd in Philadelphia last night (1/13) Brown next heads to Boston (1/14) before bringing the Blessed & Free Tour to New York City’s Madison Square Garden (1/15). Joining Brown on the road are Chase Rice and Restless Road. Over the course of its run, Brown’s Blessed & Free Tour will visit a total of 35 North American cities, including all 29 NBA basketball arenas, in one tour. Touring industry bible POLLSTAR recently featured Brown on the cover noting Brown’s “genre-bending greatness” as well as his ability to bring people together. The full POLLSTAR review is available here. For more information on Kane Brown, visit.

“That kind of connection, as well as the grace to lift people up, is a rare thing. More than using momentum or energy, he reaches people where they live and how they live – and suggests in his often fiddle heavy songs that we’re more alike than we are different.” – POLLSTAR

We were two heartbeats away
From wedding rings and a pretty ballgown dress
At the church off 40 West
And we were talking ‘bout our future on the steps
Of your daddy’s screened in porch
That if I’d ask you’d tell me yes
Well, it only took a month or so to be someone you used to know
You didn’t really have to go but ya did
And I’ve never been a somber soul
But part of me ain’t here no more
And I’ve been trying to find him ever since

ABOUT KANE BROWN:
Named to the 2021 Time100 list of the most influential people in the world, 5X American Music Award (AMA) winner Kane Brown continues to expand the perception of Country music and break musical boundaries. Noted as the “future of Country” (Billboard) and one of “31 People Changing the South” (Time), the chart-topping entertainer earned an ACM Album of the Year nomination for Mixtape Vol. 1 , (2020) and won an ACM Video of the Year Award for his anthem “Worldwide Beautiful.” Brown first broke through with his No. 1 self-titled debut album, which spent 13 weeks at the top of the chart and helped him become the first artist in Billboard history to top all 5 Billboard Country charts simultaneously. Brown’s “Heaven” and “What Ifs” are the 3rd and 7th most streamed country songs of all time. Brown’s sophomore album Experiment debuted No. 1 on the Billboard 200  and solidified Brown as the only male country artist in more than 24 years to achieve this all-genre chart feat. Experiment produced three back-to-back Double Platinum No. 1 hits and was ranked by The New York Times as one of the Top 10 Best Albums of the Year. One of only 10 country artists to sell out Los Angeles’ famed STAPLES Center (recently renamed CRYPTO.com Arena), Brown recently repeated this milestone on his newly launched Blessed & Free  headlining tour, where he is the first country artist to visit all NBA Arenas in one tour.  Brown’s current top 10 and climbing hit, “One Mississippi” released on the heels of his three-time CMA nominated multi-week No. 1 single with Chris Young, “Famous Friends.” Brown recently released his latest collaboration, “Blessed & Free” with Grammy and Oscar Award winning artist, H.E.R. to critical acclaim from the The New York Times, Billboard, Rolling Stone, American Songwriter and UPROXX. For more information on Kane Brown, visit www.kanebrownmusic.com.