KAMERON MARLOWE’S ANTICIPATED DEBUT ALBUM WE WERE COWBOYS OUT AUG. 26

KAMERON MARLOWE’S ANTICIPATED
DEBUT ALBUM WE WERE COWBOYS OUT AUG. 26 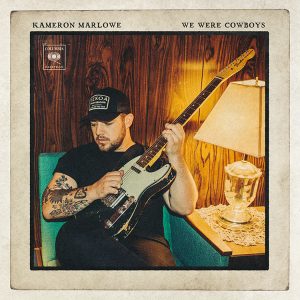 “I’ve been working on this project for the better part of two years, and I’ve lived a lot of life in that time,” said Marlowe. “This album encapsulates it all – nostalgia, romance, heartbreak, and everything in between. I couldn’t be prouder of this project, and I’m incredibly excited for fans to get a deeper look at who I am through these songs.”

The title track, “We Were Cowboys,” is available now. Written by Marlowe, Wyatt McCubbin and chart-topping singer/songwriter Tyler Farr, the song is about the unbridled confidence and fervor for life that comes with childhood. The nostalgic, dream-like track is grounded by Marlowe’s recognizable strong and raspy voice.

“Pound for pound, Kameron Marlowe is one of the best singers I’ve ever worked with in my career as a musician,” added Huff. “He’s intuitive well beyond his years and his writing is both honest and clever. Truly a force to be reckoned with, he is a bright new light in country music!”

See the full track listing below.

*songwriting credits
Songs 4 and 9 produced by Brad Hill; All others produced by Dann Huff

With a self-titled EP and extremely well-received singles under his belt, Marlowe has been hailed “a for-sure singer, full of expressive, throaty dips, raspy touches, soaring notes and hidden power” (MusicRow) and “the piece country music has been missing” (Everything Nash). He’s also been tapped an Artist to Watch by more than a dozen media outlets and partners including Amazon Music, Spotify, Pandora, Sounds Like Nashville, Country Now, Country Insider, Country Swag, Music Mayhem, Entertainment Focus, Everything Nash, Country Music Tattle Tale, and more.

This debut album announcement comes on the heels of Marlowe’s continued streaming and radio successes. “Steady Heart,” Marlowe’s fastest-growing track to date, continues to gain virality on social media and reached No. 6 on SiriusXM The Highway’s Weekend Hot 30. With more than 329 million on-demand career streams and new single “Giving You Up” climbing the radio charts, Marlowe continues to solidify himself as the most exciting new artist in country.

As opening stints for Brad Paisley, Riley Green and more prove his rising star status, he recently made his CMA Fest debut on the popular Riverfront Stage. He is also set to perform at Country Thunder festivals across North America and will soon open on select dates for Morgan Wallen’s DANGEROUS Tour. He’ll also join Luke Combs, Cody Jinks, and more for Buckeye Country Superfest at Ohio Stadium on July 23.