“KISSIN’ IN THE COLD”

FOLLOWS SONG OF THE YEAR GRAMMY® AWARD NOMINATION FOR 4X PLATINUM, IN CANADA, DUET “IF THE WORLD WAS ENDING” 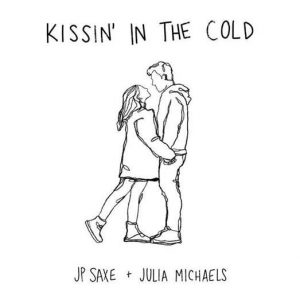 NEW YORK – DECEMBER 8th, 2020 – GRAMMY® Award-nominated artists and songwriters JP Saxe and Julia Michaels today release their heartwarming holiday duet titled “Kissin’ In The Cold” via Arista Records. Listen HERE / Watch lyric video HERE. The track arrives on the heels of JP and Julia’s GRAMMY® Award nomination for ‘Song of the Year’ for their platinum-certified hit, “If The World Was Ending.”

“If The World Was Ending” has resonated deeply with fans across the globe, resulting in over one billion streams across platforms and 120 million official music video views. The song was produced by five-time GRAMMY® Award–winner, FINNEAS. It is certified platinum in the US among other territories and is 4x platinum in JP’s native country, Canada.

GRAMMY® Award-nominated singer and songwriter JP Saxe always finds a way to cut beyond the surface, tapping into a deep connectivity with universal emotion and human experience. In October, JP released his heart-rending ballad, “A Little Bit Yours” which he performed stripped back on piano for ABC’s Live with Kelly & Ryan. Idolator praised the official music video as “epic” and proclaimed “JP Saxe ranks as one of 2020’s breakout stars.” In February, JP released his debut EP Hold It Together, which was critically praised by TIME Magazine for exploring the weird – sometimes lovely – sometimes painful – emotions that bubble up in relationships” and included “3 Minutes” off the EP in their ‘5 Best Songs of the Week’ roundup. Last winter, JP joined Lennon Stella on her European tour, and co-wrote and features on her single “Golf On TV.” JP received his first GRAMMY® nomination for “Song Of The Year” for his collaboration with Julia Michaels on “If The World Was Ending.”

JP will release new music in early 2021 with an album to follow.

GRAMMY® Award-nominated singer and songwriter Julia Michaels has transformed the pop music landscape not only from behind-the-scenes as one of the most in-demand songwriters, but also in the spotlight as a solo artist as well. In 2018, she garnered two GRAMMY® Awards nominations in the categories of “Best New Artist” and “Song of the Year” for “Issues,” her 5x-platinum selling debut single. This year, she earned a third GRAMMY® nomination for “Song Of The Year” for her collaboration with JP Saxe on “If The World Was Ending.”

Most recently, Julia released a brand-new single “Lie Like This,” from her highly anticipated full-length album expected in 2021.