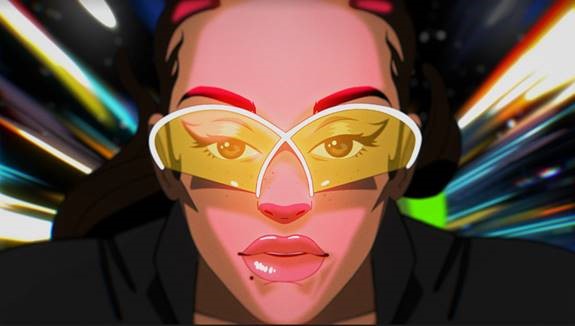 Recorded during a (pre-Covid-19) writing trip to Port Antonio in Jamaica; ‘Come Over’ is an upbeat and empowering single, inspired by “that unsure feeling when you’re  talking to someone and you can’t tell how much they’re into you and you’re chasing them when – really – it can be straight up and no one should be playing games.” – Smith states.

Accompanied by an incredible animated video; Director Amber Grace Johnson explains: “When all production froze due to COVID, Jorja reached out to me. Little did she know it’s a lifelong dream of mine to create an anime inspired piece, being a fan of Ghibli, Satoshi Kon, Aeon Flux, Wicked City and other classics. Best part was that production limits in animation are somewhat non-existent (except of course for how much time you have and resources). But in terms of actions, it felt infinite. I wanted an airborne scene, a hover motorbike, and a fight scene of an undefeated Jorja to kill off a fleet of slimy, artificial club fuckboys on a dystopian sun planet using her hair as her weapon. Naturally my script evolved into ideas only my imagination could dream up. We were lucky to have the opportunity to work with Future Power Station, who brought the vision to life and exceeded expectations.”

‘Come Over’ follows on from Jorja’s earlier release, ‘By Any Means’, a powerful song which accurately tackles the urgent energy swirling in 2020 around a larger civil rights movement and the lead single from Roc Nation’s​ upcoming ​‘Reprise’ p​roject. Earlier this month, Jorja also graced the BBC Radio 1 Live Lounge studios to perform an incredible stripped back rendition of the single – link here.

Over the past two years since the release of her​ Grammy-nominated debut album ‘​Lost & Found’,​ Smith has been celebrated unanimously across the world for her evocative song-writing, powerful delivery, pure emotion and unbridled talent as a young woman navigating her way through the world. Smith has graced mutilple magazine covers, performed at awards ceremonies and on late night TV, and sold out shows across the world, now surpassing ​over one billion global streams. Her 2019 hit single ​‘Be Honest’ featuring Burna Boy ​has become her biggest song to date at almost ​200M​ ​streams worldwide. Smith continues to hone her craft and ‘Come Over’ serves as a much-anticipated prelude for more new music from Smith to come in 2020 and 2021.