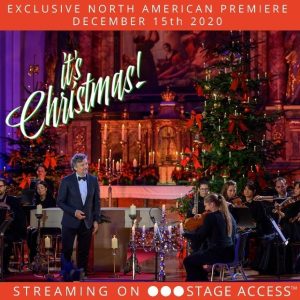 Toronto, ON – December 15, 2020 – Shot in three locations in Oberndorf, the historic city of world hit “Silent Night”, and Salzburg, Jonas Kaufmann takes us on a journey through international Christmas carols: from Germany and Austria to Sweden and the USA. To the sounds of international “Christmas hits” from “Entre le bœuf et l’âne gris” to “White Christmas,” Jonas Kaufmann also takes us into the wintry landscape and Advent hustle and bustle of neighbouring Salzburg. As a special “treat”, he also sings two Alpine Christmas songs to harp accompaniment in the intimate atmosphere of the small Silent Night Chapel.

“When I think of Christmas, a lot of memories come back to me,” says Jonas Kaufmann. “Christmas is the festival of pausing, of remembering. It is the festival of joy and lights. And these songs bring back to me happy memories of the joys of the Christmas season, from grateful devotions to exhilarating celebrations with friends and relatives.”

Streaming in HD with a length of 75 minutes, It’s Christmas! is a production of Salve TV and C Major Entertainment in coproduction with ZDF.

The album version of It’s Christmas! was released worldwide November 13th. The 40-song double-album from Sony Classical is the tenor’s personal selection of favorite holiday songs from age-old Christmas hymns & carols like “Adeste Fideles” & “Silent Night” to contemporary holiday classics like “Winter Wonderland” & “Let it Snow,” plus some very special alpine Christmas songs with intimate harp accompaniment. ⁠From contemplative religious worship to the excitement of unwrapping presents around the family tree: the album is a reflection of Kaufmann’s own memories of the holiday and a celebration of the rich and diverse sounds of this special time of year.⁠ https://jonaskaufmann.lnk.to/ItsChristmasLW 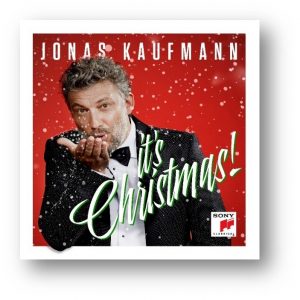 STAGE ACCESS™ is the on-demand streaming platform featuring iconic content in dance, opera, concerts and theatre with a growing list of performing arts original content including Yo-Yo Ma, Six Solo Bach Cello Suites from the Odeon, Athens and The 3 Tenors: From Caracalla to the World, The 30th Anniversary Documentary. Currently available in North America on the web at www.stageaccess.com, iOS, Android, Apple TV, Amazon Fire and Roku, STAGE ACCESS™ was founded by Bruce H. Lipnick with the mission of expanding access to the arts and providing support for arts organizations. Tripp Hornick of Quince Street Strategy leads operations.

C Major Entertainment is a leading, international operating distributing company for exclusive audio visual music programs: From Ballet, Opera, Concert and Documentary to Rock and Pop in its highest quality. The complete catalogue comprises more than 3,500 program hours of music & art on film and TV formats from Pavarotti to Karajan, from Jonas Kaufmann to Anna Netrebko, from Alicia Keys to Depeche Mode. The complete catalogues can be found at www.cmajor-entertainment.com