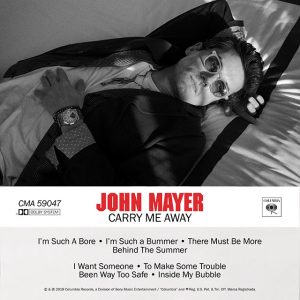 John Mayer has released “Carry Me Away,” a song written and produced by Mayer and available HERE.

“Carry Me Away” is the second new Mayer track released this year, via Columbia Records, from the GRAMMY Award®-winning artist. “I Guess I Just Feel Like” was released in February.  2018’s “New Light” has been certified Platinum and John’s last album, The Search for Everything, has been certified gold.

Mayer’s 2019 World Tour launched in March, with concerts in New Zealand, Australia, and Asia and North America, before heading to Europe in October. These “Evening with John Mayer” concerts feature two sets of music spanning his entire recording career.

In addition to his solo world tour, John toured North America in 2019, for the fourth consecutive year, with Dead & Company, featuring Grateful Dead members Bob Weir, Bill Kreutzmann and Mickey Hart, along with Oteil Burbridge, Jeff Chimenti – and Mayer himself. Additional concerts have just been announced for the band’s Fall Fun Run on November 5th and 6th at Nassau Veterans Memorial Coliseum.

Singer/songwriter John Mayer has won seven GRAMMY® awards and has earned a record seven U.S. #1s on Billboard’s Top Rock Albums chart and 25 entries on the Hot Rock Songs chart, the most for any solo artist. In 2018, he released the Gold-certified “New Light,” while working on his eighth solo album, the follow-up to 2017’s critically acclaimed The Search for Everything. For the third consecutive year, Mayer toured with Dead & Company in 2018, who played to over 500,000 people on its third and largest tour. Additionally, he launched ‘Current Mood,’ his highly regarded Instagram Live show on Sundays, which some have dubbed, “the best way to start the week on a high note, maybe even the only way.”