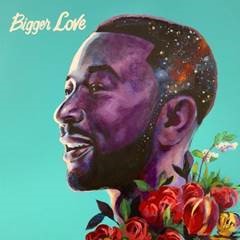 (June 19, 2020) – Multi-platinum, 11-time GRAMMY Award-winner John Legend today released his new album BIGGER LOVE via Columbia Records, available now everywhere. As John Legend sees it, the world could use a reminder of the power of love and his seventh studio album, BIGGER LOVE, is just that.

“During these painful times, some of us may wonder if it’s ok to laugh or dance or be romantic,” Legend says.  “Lately, the images of black people in the media have been showing us with knees on our necks, in mourning, or expressing our collective outrage.  We feel all those emotions.  But It’s important for us to continue to show the world the fullness of what it is to be black and human. Through our art, we are able to do that. This album is a celebration of love, joy, sensuality, hope, and resilience, the things that make our culture so beautiful and influential.”

BIGGER LOVE is classic John Legend: Soulful, joyful, loving, hopeful and tender. The 16-track album is a heady mix of jubilant pop-soul (“Bigger Love,” “I Do”, “Wild”), lush grown and sexy R&B (“U Move I Move,” “Slow Cooker,” “Favorite Place”), hypnotic hip-hop inspired grooves (“Ooh Laa,” “Actions”) and the powerful ballads that are the cornerstone of his work (“Conversations in the Dark,” “Never Break”).

Rolling Stone declares the title track “Bigger Love,” “a dance floor-ready pop song…that exudes jubilance even in these tough times.” Billboard says “Actions,” “can mean something slightly different for everyone, but once again, Legend has used his platform for positive motivation. MTV calls the #1 song “Conversations in the Dark” a “tear-jerker” and says, “John Legend has written the world’s sweetest vows.”

This evening, John will celebrate the album release with a special Juneteenth edition of Verzuz with Alicia Keys. The Instagram Live series has been staging battles between musicians since March and will feature a special musical duel and battle of the pianos with John and Alicia starting at 8pm ET. Watch on the @verzuztv page on Instagram.

Tomorrow, John will be performing for Canada on Budweiser Stage at Home, a weekly one-hour TV concert series brought to music fans by Live Nation. It airs on Citytv and Citytv.com Saturday, June 20 at 8 p.m. (local). The events will also be available to stream on Live Nation’s Live From Home platform.

In honour of Father’s Day, Legend will also host a one-hour variety special, “John Legend and Family: A Bigger Love Father’s Day,” airing Sunday, June 21 at 8 pm ET/PT on ABC. The evening will be a tribute to fathers everywhere and will blend live musical performances from his new album BIGGER LOVE with some levity, humour and touching moments.

You can RSVP for a free ticket HERE.

BIGGER LOVE is about bringing light and love at a time when things feel otherwise.

In a statement to his fans, Legend says, “I’m under no illusion that music can save the world or solve the world’s problems, but I’ve always turned to music to help me through tough times and I know many of you have done the same.  That’s why I couldn’t wait to release this album to the world.  I debuted in 2004 with an album called GET LIFTED.  And now, as we enter the summer of 2020, I hope this new album can get you lifted again, fill your hearts with love and inspiration, give you something to dance to, something to hold hands to, something to make love to.”

Multiplatinum artist John Legend has garnered eleven Grammy Awards, an Academy Award, a Golden Globe Award, a Tony Award, and two Emmy Awards, making Legend the first African-American man to earn an EGOT. Legend has released six celebrated solo albums including, Get Lifted (2004), Once Again (2006), Evolver (2008), Love in the Future (2013), Darkness and Light (2016), and A Legendary Christmas (2018) along with a collaborative album with The Roots called Wake Up! (2010). Legend starred in NBC’s “Jesus Christ Superstar Live in Concert” in 2018, winning an Emmy for Outstanding Variety Special and nominated for Outstanding Lead Actor (TV Movie or Limited Series). Legend joined “The Voice” for Season 16 (2019), winning with his mentee Maelyn Jarmon and was most recently a coach on Season 18 and is slated to return for Season 19. John is a partner in Get Lifted Film Co., serving as an Executive Producer for “Rhythm & Flow,” “Southern Rites,” “United Skates,” WGN America’s “Underground,” and films “Southside with You” and “La La Land.” As a philanthropist, Legend initiated the #FREEAMERICA campaign in 2015 to change the national conversation surrounding our country’s misguided criminal justice policies and to end mass incarceration.