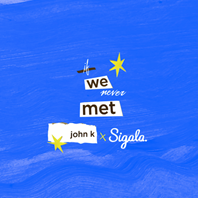 “if we never met” out now

In 2019, “if we never met” from Florida native John K – signed to Epic Records in the US – took the summer by storm, garnering attention from the likes of Nylon, Billboard and Rolling Stone – who marked the track as a ‘Song You Need To Know.’ Fast forward to February 2020, and “if we never met” now has over 64 million streams, with 23 million streams on Spotify alone since release last year. John is currently on the cover of Pop Rising – the second biggest global Spotify playlist – and the US Viral 50 Charts on Spotify, plus UK lists such as The Pop List and Chilled Hits. The song is also in the Top 15 at Hot AC Radio, whilst he also recently performed the song on The Today Show.

The song has now been re-worked by Sigala, following the huge success of his previous singles “Wish You Well” with Becky Hill and “We Got Love” featuring Ella Henderson, out today via Ministry of Sound.

The BRIT-nominated DJ and Producer takes the funky guitar lines and John’s soulful vocals of the original, and injects the track with uptempo dance beats and synths, culminating in tropical-inspired brass notes.

You can listen to the John K x Sigala version of “if we never met” here: https://smarturl.it/JohnK_Sigala_iwnm

2020 has already seen Sigala’s single “Wish You Well” with Becky Hill been certified Platinum in the U.S. (600,000 sales) and his debut album Brighter Days certified Gold in the U.S. (100,000 sales). He also embarked on a UK tour last weekend with two sold-out shows at the Barrowlands in Glasgow. Following the UK shows he will head to Europe and America.

The remaining UK shows are: