JOEY WARONKER AND MAURO REFOSCO ARE 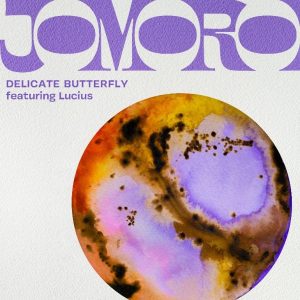 JOMORO is the alias of the musical merger of…

Joey Waronker – Veteran drummer of session and live renown with the likes of Paul McCartney, Johnny Cash, Adele, Beck, Roger Waters, Air and R.E.M., and full-fledged member of Ultraista and Atoms for Peace, the latter of which also featured bandmate…

Whereas the two have recorded together before—notably alongside Thom Yorke, Flea and Nigel Godrich on Atoms For Peace’s #2 charting album AMOK—with JOMORO, Joey and Mauro build their own world at the crossroads of the electronic and the percussive. The expanse of the duo’s musical realm is mapped throughout the sonic geography of its debut album, Blue Marble Sky (Sony Music Masterworks): a 12-track travelogue that transports the listener to aural environs ranging from the tranquil Brazilian rainforest to bustling city streets, with occasional breezy pop detours along the way.

The album is preceded by first single, “Delicate Butterfly” featuring Lucius and currently available across all platforms – LISTEN HERE. The single is the direct result of the pair reaching back to the pre-genesis of JOMORO: a live soundtrack they created for Rag & Bone’s Fall/Winter 2016 New York Fashion Week show. “Delicate Butterfly” fleshes out an original instrumental framework and adorns it with the vocals of Jess Wolfe and Holly Laessig of Lucius. The end product is a heavenly harmonic duet that flutters off into the ether like a choir at the edge of the galaxy.

“Delicate Butterfly” is both first single and second taste of JOMORO’s debut, as it follows last month’s soft release of the instrumental track “Mirror” – LISTEN HERE.

Blue Marble Sky was written, played and produced by Joey and Mauro, who made the most of their pandemic downtime trading files bi-coastally, and enlisting collaborators such as bassist Gabe Noel (Kendrick Lamar, Kamasi Washington), trumpeter Michael Leonheart (Mark Ronson, Bruno Mars) and multi-instrumentalist Jonathan Mooney (Other Lives). The album was divided into vocal tracks, instrumental tracks and Brazilian tracks, its numerous highlights including the gorgeous downtempo “Nest” featuring Sharon Van Etten, the pulsating baile-funk textures of “Until We Equal” featuring Brandon Markell Holmes, a pair of tracks featuring popular Brazilian songstress Karina Buhr and more.