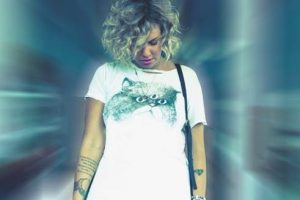 July 10, 2017 – Toronto, ON – Jocelyn Alice will perform the Canadian National Anthem at the 2017 MLB All-Star Game presented by Mastercard and televised nationally on the MLB Network (in Canada by Rogers Sportsnet and RDS). Jocelyn’s performance will air in over 200 countries, reaching over 70M households worldwide. The MLB All-Star Game is on Tuesday, July 11, at Marlins Park in Miami, Florida, as announced by the Major League Baseball association this past week.

The Calgary, AB native rose to fame with her 2015 breakout summer song, ‘Jackpot.’ The track topped the radio and sales charts eventually being certified platinum in Canada. Since then, Jocelyn has continued to release hit after hit including her latest single, “Bound To You” now a top 15 radio song in Canada.

About Jocelyn Alice:
Jocelyn’s impeccable talent is underscored by her notable accolades thus far. She has received countless awards including Spotify 2016 Canadian Artist To Watch, 2016 SOCAN Award Winner, 2015 Bell Media Future Breakout Star Winner and most recently, her nomination for the 2017 Western Canadian Music Awards “Pop Artist of the Year.”

Prior to her solo career, Jocelyn performed in the indie soul pop duo, Jocelyn & Lisa, and co-wrote music featured in the modern cult classic TV shows One Tree Hill and Pretty Little Liars, additionally, her cover of “(So Groovy) Reach Out of the Darkness” was featured in a nationally aired Target commercial.

Jocelyn is undoubtedly a musical force to be reckoned with. With only seven songs on Spotify, she has exceeded 25M streams on the platform with nearly 1M monthly listeners globally. Jocelyn is currently recording new material working towards a debut solo EP.

“Bound To You” Spotify Embed: