JENNIFER LOPEZ IS BACK WITH SIZZLING NEW SINGLE “DINERO” 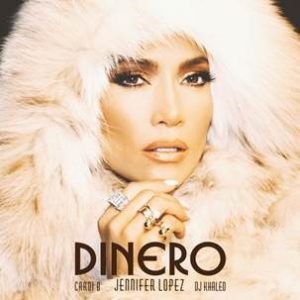 FEATURING SUPERSTAR PAIRING WITH DJ KHALED AND CARDI B

Unmatched as a captivating performer and collaborator, Jennifer turns up the burner on her trademark vocal style on the enticing new song, thrilling tastemakers and loyal Lopez fans around the globe who’ve eagerly awaited the banging new track.  Jennifer looks fiercer than ever gracing the cover of the new single, the photo capturing the iconic superstar casting her mesmerizing gaze under a luscious fur coat with rings blazing.  Her incandescent presence will be on full display at this weekend’s Billboard Music Awards, when she performs “Dinero” on stage.

Jennifer’s previous single “Us” was a set-up to “Dinero,” with the song catapulting into the Top 10 of iTunes’ Overall Top Songs Chart and Top Pop Songs Chart instantaneously.  Produced by the cutting-edge team of Skrillex (Justin Bieber, Fifth Harmony) and Poo Bear (DJ Khaled, Usher), the track reacquainted fans with Jennifer’s willingness to seductively push the envelope.

Daunting and daring as always, Jennifer continues her masterful evolution as a multi-threat performer on “Dinero,” serving up something new and even dexterously cinematic in scope!  Catch Jennifer’s sure-to-be-inspiring performance of “Dinero” on the Billboard Music Awards this Sunday, May 20th at 5pm PST/8pm EST on NBC.

About Jennifer Lopez
Jennifer Lopez is an award-winning singer, actress, producer, and entertainer who has established herself in both music and film. She is a successful recording and touring artist who has sold over 75 million records and has a cumulative box office gross of over $2 billion. Lopez is one of the most influential female artists in history. As an artist, fashion icon, entrepreneur, and a philanthropist, Jennifer Lopez has been named Forbes’ “Most Powerful Celebrity” and People Magazine’s first “Most Beautiful Woman in the World”. Jennifer Lopez is a global icon and the ultimate multihyphenate.