James Arthur
It’ll All Make Sense In The End
Out Today! 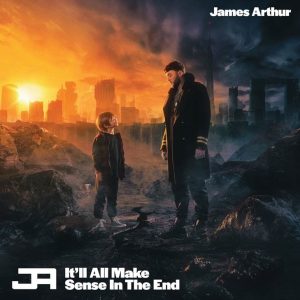 James wrote the majority of the album in lockdown in his home in Surrey. His foresight in building a studio and investing in industry-standard recording gear paid immediate dividends. Trusted collaborators like Andrew Jackson, which whom he’d written ‘Train Wreck’, were able to come to him. Because they were writing and recording at home rather than in a pricey commercial studio, the musicians could work, should they want to, round the clock, not to the clock.

“And all of a sudden, the music started sounding great. From day one there was a sound that I wanted to go for. Even early on it sounded like a real album, a proper body of work. This is the first time I’ve made an album all in one place and you can hear this in the music. There’s something really comfortable about working in your own home   – I was able to be more vulnerable than ever.”

After writing the boldly autobiographical first single ‘Medicine’, James and Jackson quickly came up with ‘Losing You’, an anthemic electronic-rock song that’s big of heart, riffs and emotive punch. “I wanted this album to have proper rock elements. The kind of rock I love is emo and pop-punk, so I wanted to do my take on that genre. Lyrically that song, like a lot of the songs, is the sound of someone who’s doing a lot of reflecting, a lot of processing and being really honest about where I’ve been in my head. And in that song I’m talking to myself: ‘I feel like I’m always on the verge of losing you.’”

Another early keeper was ‘Déjà Vu’, written with Jackson and Mark Crew (Bastille, Rag’n’Bone Man). Demonstrating the full range of his vocal abilities, Arthur sings: “You fucked me up, I can’t get enough…” Is that about a woman, drugs, demons? “I think it’s a bit of everything!” he replies with a laugh. “It’s been well documented that I’ve had my issues with all of those! It’s just quite honest stuff, really.”

There’s more no-holds-barred autobiography on the acoustic-meets-trap second single ‘September’. As confessional in his lyrics as he ever was, Arthur also isn’t afraid to sing to the next generation: ‘Emily’ is a tender, intimate mea culpa to the daughter he might one day have. “That arose from conversations about having kids. Would I even be a good dad? What if they read about all the shit I’ve been through? It doesn’t matter,” he reasons, “because ultimately I’m the guy who’s going to be there for you all your life.”

Changing things up again is ‘SOS’. “It feels like a bit of an album-defining song. Everything I wanted to achieve is in that track. It has a heavy rock, 30 Seconds To Mars-esque chorus. Then in the verses you have this rap flow which is a bit Miguel-esque. And at the end there’s a choir singing. I can see the video already, me walking down the street, singing to all these broken souls trapped in their houses for a year.” It sounds like freedom, and it sounds like hope, which is exactly what James Arthur has given himself over the last year.

In moving out of London, the musician has created a safe space: a working place, family place, fitness place. In building that sanctuary he’s felt even more comfortable to be even more open, not just about the things that are inspiring him but also the things that are plaguing him. “One hundred per cent,” he affirms. “Travelling, going to other people’s studios, doing sessions in new places – for someone like me who has a bit of social anxiety, all that was difficult. But working at home allowed me to be more vulnerable.”

And it allowed him to finesse a sound that gels over the entire album, that process aided by additional production from Matt Rad, who’s worked with Taking Back Sunday, one of his favourite bands. He helps bring cohesion. “The sound is very simple. It’s basically raucous guitars with trap beats and strong, strong melodies,” he says of a musical approach he’s been honing for years in his collaborations with superstar artists such as Ty Dolla $ign, Machine Gun Kelly and Juicy J. Equally, because of the trap beats, he wanted to bring a hip hop sensibility to his vocals.  “How would Travis Scott approach this song? What would Post Malone do on the second verse of ‘Medicine’? If I was to describe the album it would be that: rap verses with rock choruses. That’s kind of it. It’s exactly what I wanted.”

James has sold over 30 million records worldwide and has to date released three hugely successful albums ‘James Arthur’ (UK No.2), ‘Back From The Edge’ (UK No.1) and ‘YOU’ (UK No.2), alongside nine solo UK Top 40 singles. He has had two No.1 smash hits and was awarded a disc for reaching a billion streams on Spotify with ‘Say You Won’t Let Go’, the No.1 global hit that brought the singer-songwriter from Middlesbrough back from the edge (it  currently has 1.7 billion streams on the platform). James recently dominated the airwaves and charts with his storming collaboration with Sigala ‘Lasting Lover’. The track was a No.1 airplay song in the UK, No.1 on iTunes and Top 10 on the Official Singles Chart.

James has announced tours of both UK and Ireland and North America in 2022, including Toronto May 13 and Montreal May 14.