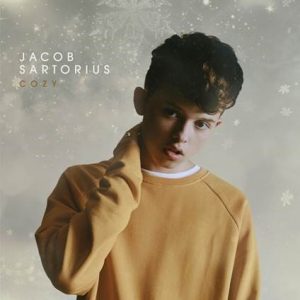 Today, Pop-sensation Jacob Sartorius releases “Cozy” via RCA Records, a new single just in time for the holiday season. The single, written and produced by The Futuristics and Cook Classics, as well as written by Emily Warren & Steph Jones, comes on the heels of Jacob’s live television performances on the Nickelodeon HALO Awards and MTV’s TRL. “The holidays are such an important time for my family and me to spend together. I had so much fun recording a holiday single and hope my fans enjoy listening to ‘Cozy’ and spending time with their families or cozied up with that special someone this holiday season,” says Jacob. Fans can purchase and stream “Cozy” below.

The teen pop sensation recently wrapped the European and Mexico leg of the Left Me Hangin’ World Tour where he performed for sold out audiences in Paris, London, Berlin, Mexico City and more! Jacob is gearing up to embark on the North America leg of the tour, which will kick off on January 18 in Silver Spring, MD. Jacob is set to perform for audiences in New York City, Toronto, Vancover, Los Angeles and additional cities across the continent. Very limited tickets remain for the nearly sold-out tour and fans can purchase tickets at www.jacobsartorius.com.

With an irresistible voice, magnetic charisma, and that instantly recognizable coif, Jacob Sartorius built an undeniable and unique connection with millions of fans worldwide in 2016—which only grows stronger by the day. The 15-year-old all-around entertainer, musician, actor, and social media force seamlessly evolved from online stardom to mainstream ubiquity by following a path of his own. In under the span of a year, his debut single “Sweatshirt” independently achieved RIAA gold status, amassed over 21 million Spotify streams, and 70 million-plus YouTube views as he sold out his very first headline tour, the All My Friends Tour. Jacob’s single ‘Hit or Miss’ also achieved RIAA gold status. Recently, Jacob graced the cover of Billboard Magazine, performed at the Kid’s Choice Awards, guested on HBO’s Vice News Now, appeared on NPR’s Here and Now, and attracted praise from The New York Times, Seventeen, Just Jared Jr., and many others, in addition to receiving nominations at the People’s Choice Awards, Teen Choice Awards, Kid’s Choice Awards, iHeart Radio Awards, and Streamy Awards. Everything set the stage for the 2017 release of his debut EP, The Last Text, worldwide tour, and its follow-up Left Me Hangin’ EP.