ALBUM AVAILABLE MAY 7; FEATURE-LENGTH FILM STREAMING FIRST ON FACEBOOK MAY 8 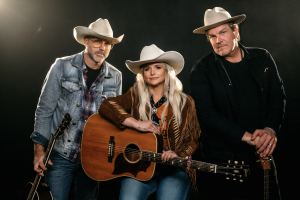 NASHVILLE, Tenn. – The first look at “The Marfa Tapes Film” arrives today, as Jack Ingram, Miranda Lambert, and Jon Randall offer a new take on “Tin Man” from the upcoming feature-length film that documents the making of their anticipated album, The Marfa Tapes. Watch here.

This new music video, premiering first on Facebook, showcases Lambert performing the 2017 ACM Song of the Year winner, which she penned with Ingram and Randall, with nothing more than an acoustic guitar against the sprawling, expansive terrain. Lambert surprised fans with an impromptu Q&A on Facebook Live ahead of the video’s premiere, sharing stories from the upcoming releases.

“The Marfa Tapes Film” will stream Saturday, May 8 (7:00 p.m. ET / 6:00 p.m. CT) and fans on Facebook will get a first look for the first 24 hours via Lambert’s official Facebook page. Directed by Spencer Peeples, the film features live performances set against the West Texas backdrop, candid interviews, and behind-the-scenes footage captured during the five-day album recording sessions in Marfa last November.

Meanwhile, The Marfa Tapes album arrives May 7 via Vanner Records/RCA Nashville (pre-order/pre-save here). Early reviews have raved about the LP, which Entertainment Weekly proclaims “both familiar and new in equal measure, and one of the most inspired projects Lambert has ever released.” The Austin American-Statesman declares the album “an earnest collection of heartache ballads, campfire yarns and rambunctious story songs propelled by colorful characters making questionable life choices.” Nashville Lifestyles also applauds the “fascinating” work that “only an artist at her peak could pull off.”

In addition to “Tin Man,” available album cuts include “wistful and romantic” (Billboard) “In His Arms,” “harmony-drenched cheating saga” (Rolling Stone) “Am I Right Or Amarillo,” and the “slow, sexy” (Whiskey Riff) ballad “ Anchor.”

Barely a dot on the map, Marfa is an eccentric outpost in the midst of a vast expanse of nothingness, the perfect place to lose – or find – yourself. For Lambert, Randall, and Ingram, it’s both. For more than half a decade, the desolate location has become a songwriting haven for the trio, yielding both massive hits and profound personal growth. Recorded raw and loose with just a pair of microphones and an acoustic guitar, The Marfa Tapes is a stunning work of audio verité; an intimate, unadorned snapshot of a moment in time fueled by love, trust, and friendship.

The trio recorded much of the album outdoors, inviting the ambient sounds of the desert to seep into their live, bare bones performances, and the atmosphere is utterly transportive. While a couple of the tracks may already be familiar to listeners – “Tin Man” as well as fan favorite “Tequila Does” – the vast majority of these songs have never been heard outside of Marfa. The result is a candid, unvarnished look at Lambert, Randall, and Ingram’s undeniable chemistry in its purest, most honest form.