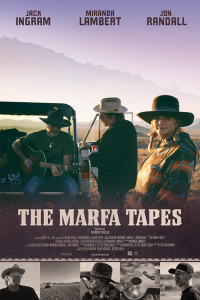 TORONTO, ON.—Jack Ingram, Miranda Lambert, and Jon Randall will give viewers a rare glimpse inside the creative process behind their anticipated, upcoming album The Marfa Tapes with a full-length film premiering Saturday, May 8 (7:00 p.m. ET / 6:00 p.m. CT).

Available to view for 24 hours via Lambert’s official Facebook page , the film was directed by Spencer Peeples and features live performances set against the West Texas backdrop, candid interviews, and behind-the-scenes footage captured during the five-day album recording sessions in Marfa last November. Barely a dot on the map, Marfa is an eccentric outpost in the midst of a vast expanse of nothingness, the perfect place to lose – or find – yourself. For Lambert, Randall, and Ingram, it’s both. For more than half a decade, the desolate location has become a songwriting haven for the trio, yielding both massive hits and profound personal growth. Recorded raw and loose with just a pair of microphones and an acoustic guitar, The Marfa Tapes is a stunning work of audio verité; an intimate, unadorned snapshot of a moment in time fueled by love, trust, and friendship.

The Marfa Tapes arrives May 7 via Vanner Records/RCA Nashville (pre-order/pre-save here). Anticipation continues to grow for the album, which Entertainment Weekly proclaims “both familiar and new in equal measure, and one of the most inspired projects Lambert has ever released.” The trio performed the latest sneak-peek track, “Geraldene,” on “The Ellen DeGeneres Show” Wednesday. Watch here . They also recently performed the debut release, “In His Arms,” on the “56th ACM Awards.” Watch here.

Heralded as a “tender, lovely tune” (Consequence of Sound), “In His Arms” has been lauded as “a low-key charmer…Wistful and romantic” (Billboard) and “a lovely dose of traditional, bare-bones country” (Brooklyn Vegan). Additional early highlights include “Tin Man,” revisited in its original, stripped-down state for the first time since its whirlwind run up the charts and slew of award nominations, as well as a win for ACM Song of the Year. The “harmony-drenched cheating saga” (Rolling Stone) “ Am I Right Or Amarillo” and the “slow, sexy” (Whiskey Riff) ballad “Anchor” are also available now, along with accompanying videos.

The trio recorded much of the album outdoors, inviting the ambient sounds of the desert to seep into their live, bare bones performances, and the atmosphere is utterly transportive. While a couple of the tracks may already be familiar to listeners – “Tin Man” as well as fan favorite “Tequila Does” – the vast majority of these songs have never been heard outside of Marfa. The result is a candid, unvarnished look at Lambert, Randall, and Ingram’s undeniable chemistry in its purest, most honest form. 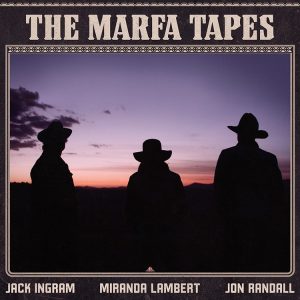