IT’S A DOUBLE DOSE OF DOLLY

DOLLY PARTON RELEASES “GIRL IN THE MOVIES” AND THE MUSIC VIDEO FOR “HERE I AM,” HER ACCLAIMED COLLABORATION WITH SIA, FROM THE DUMPLIN’ ORIGINAL MOTION PICTURE SOUNDTRACK 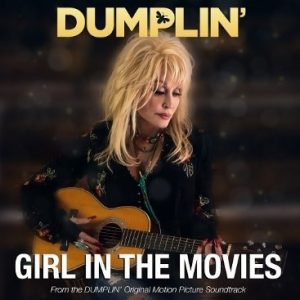 NASHVILLE, TN – Music fans can pre-order now the highly anticipated Dumplin’ Original Motion Picture Soundtrack and instantly receive Dolly Parton’s “Girl In The Movies” and her previously-released collaboration with Sia, “Here I Am.” The soundtrack, which features Parton on every song, releases Nov. 30, and “Dumplin’” will premiere in select theaters and on Netflix on Dec. 7.
In addition to retail pre-orders, fans will have access to limited edition Dumplin’ Original Motion Picture Soundtrack merchandise bundle offerings. From The Girl In The Movies Tiara to t-shirts and coffee mugs, plus a limited run of Dolly autographed album covers, fans can explore the full D2C store here.

One of those co-writes, “Girl In The Movies,” has already garnered a nomination for Best Original Song from a Feature Film by the Hollywood Music In Media Awards. Media attention is swirling leading into awards season with Entertainment Weekly proclaiming “an empowering anthem” and Vanity Fair opining “one thing is clear, Oscar season will be a lot more joyous with [Parton] in it.”

The music video for Parton’s “Here I Am” featuring Sia is available to stream HERE. Upon this track’s release in September, it quickly hit No. 1 on iTunes Country Songs and Top 10 all-genre chart. 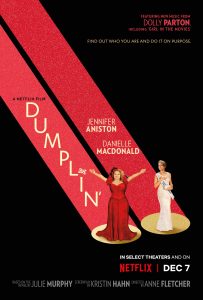 About “Dumplin’”
Dumplin’ (Macdonald) is the teenage daughter of a former beauty queen (Aniston), who signs up for her mom’s pageant as a protest that escalates when other contestants follow her footsteps, revolutionizing the pageant and their small Texas town. The Netflix Film stars Macdonald (Bird Box, Patti Cake$) and Aniston (Upcoming Murder Mystery, Horrible Bosses, Marley and Me), in addition to Odeya Rush (Lady Bird, Goosebumps), Dove Cameron (Agents of S.H.I.E.L.D., Liv and Maddie, Descendants), and Harold Perrineau (Claws, Lost). It is directed by Anne Fletcher (The Proposal, 27 Dresses).

Screenwriter Kristin Hahn wrote the adaptation of Julie Murphy’s No. 1 New York Times bestselling novel of the same name. Producers include A Cota Films and 50 Degrees Entertainment Presentation – Michael Costigan (American Gangster, A Bigger Splash, Brokeback Mountain, Ghost in the Shell), Hahn (The Switch, Cake), Mohamed AlRafi (Above Suspicion, Lying and Stealing), and Trish Hofmann (Gringo, Get On Up). Executive producers are Aniston and Danny Nozell. 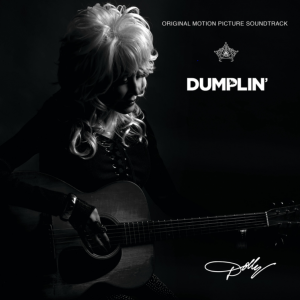