CHRISTINA AGUILERA: THE XPERIENCE LAUNCHES FRIDAY, MAY 31 AT

FOR TWO ADDITIONAL GRAMMY AWARDS IN 2019 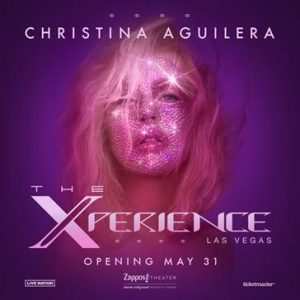 One of the most accomplished performers of all time, Aguilera has won six GRAMMY Awards, including one Latin GRAMMY Award. She is currently nominated for two additional GRAMMY Awards.

“The Xperience is going to be my most ambitious show yet. Getting to perform in this adult playground we call Las Vegas is inspiring me to bring forth all of my talents in a mind-blowing theatrical experience – song, dance, visuals and uninterrupted high energy. For years I have been collecting ideas and concepts that have yet to be implemented on my stages, and Las Vegas is the perfect opportunity for me to collectively showcase my artistry. I cannot wait to bring you into The Xperience,” Christina said.

“Christina is a powerhouse artist whose voice and music has transcended generations of fans,” said Jason Gastwirth, president of entertainment at Caesars Entertainment. “We are proud Christina will call Planet Hollywood home and wow audiences in the intimate Zappos Theater.”

General ticket prices begin at $60 plus applicable tax and fees, and may be purchased online at www.ticketmaster.com/Xtina or in-person at the Planet Hollywood box office. All shows begin at 9 p.m.

To celebrate the newly announced residency, iHeartMedia will host iHeartRadio LIVE with Christina Aguilera at the iHeartRadio Theater Los Angeles on January 31. The exclusive event will feature an intimate performance and Q&A. Fans can watch a livestream of the event on Aguilera’s Facebook page on January 31 at 7 p.m. PT / 10 p.m. ET.

‪Christina Aguilera‪ is a six-time GRAMMY Award-winning singer-songwriter renowned for her powerful voice and hit songs. Throughout her career, she has sold more than 43 million records worldwide. Aguilera has achieved five No. 1 singles on the Billboard Hot 100 chart making her the fourth female artist to top the chart over three consecutive decades (1990s, 2000s, and 2010s). She has received a star on the Hollywood Walk of Fame and holds the prestigious honor of being the only artist under the age of 30 included in Rolling Stone Magazine’s list of the 100 greatest singers of all time. In 2011 she entered the world of television as a coach on NBC’s Emmy Award nominated show The Voice. Aguilera has served as global spokesperson for Yum! Brands’ World Hunger Relief effort since 2009 and has helped raise over $150 million for the World Food Program and other hunger relief agencies.