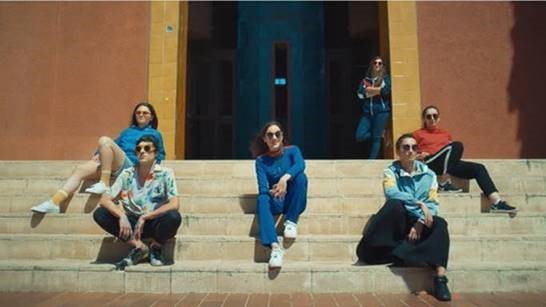 Today Jain unveils the much anticipated official music video for “Alright”, the first single of her sophomore album that will be released on August 24th on Sony Music.

In the making of this video, JAIN once again called upon Greg & Lio, the same successful artistic team who directed her first video trilogy (“Come”, “Makeba”, “Dynabeat”) which now boasts over 150 million views combined. “Makeba” won the award for Best Video Award at French Victoires de la Musique in 2016 and was nominated for Best Music Video of the year at the 60th Grammy Awards this year. Greg & Lio also won Best Video of the year with Orelsan’s “Basique” at 2017 Victoires de la Musique.

The video for “Alright” was shot in May 2018 in Barcelona. It features Jain and five women breaking free from the chains of their daily lives to live out their passions in a slightly surrealistic interpretation powered by Greg & Lio’s super creative special effects. With a pinch of Girl Power attitude, this video’s intention is to display women’s strength in a playful and poetic manner while overcoming a number of clichés.

Three years ago Jain released her debut album Zanaka – success may have arrived overnight, but Jain’s joyous, sun-soaked, rhythm-driven sound had been brewing for years, collecting influences from multiple countries and a myriad of musical genres – Arabic percussion, African rhythms, electro, reggae, soul and hip hop among them. As the petite singer succinctly puts it: “It happened fast, very fast.” Led by hit songs “Come” and “Makeba”, Zanaka was an instant Pop classic, not only in France but also across the border in the 18 countries lucky enough to feel her energy and presence on stage.

Now a true ambassador for multi-cultural Pop, Jain is back with her new single “Alright”, a skillful as ever blend of all of her influences combined into a break-up song infused with the freshness that we’ve come to know her for.

In her own words:

“I wrote ‘Alright’ as a hymn to independence… The track is constructed around duality, just like love stories: both sweet and fierce, the song highlights determination in the face of despair. ‘Alright’ speaks of love, the kind that lifts you up and pushes you forward”

JAIN is currently touring in Europe and Quebec for the Summer festival season. She will be heading to North America for an extensive tour in October. Full dates below: