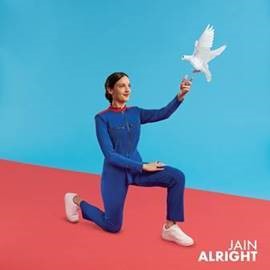 Three years ago Jain released her debut album Zanaka – success may have arrived overnight, but Jain’s joyous, sun-soaked, rhythm-driven sound had been brewing for years, collecting influences from multiple countries and a myriad of musical genres – Arabic percussion, African rhythms, electro, reggae, soul and hip hop among them. As the petite singer succinctly puts it: “It happened fast, very fast.”

Now a true ambassador for multi-cultural Pop, Jain is back with her new single “Alright”, a skillful-as-ever blend of all of her influences combined into a break-up song infused with the freshness that we’ve come to know her for.

In her own words:

“I wrote ‘Alright’ as a hymn to independence… The track is constructed around duality, just like love stories: both sweet and fierce, the song highlights determination in the face of despair. ‘Alright’ speaks of love, the kind that lifts you up and pushes you forward”

Led by hit songs “Come” and “Makeba”, her debut album Zanaka was an instant Pop classic, not only in France but also across the border in the 18 countries lucky enough to feel her energy and presence on stage!

Jain will be back in Canada this summer for her own tour as well as the festival circuit.  She’ll hit the stage in front of a sold out MTelus on July 5th and 6th as part of the Montreal International Jazz Festival.  She’ll also perform on July 7th in Sherbrooke and will end her Quebec tour with a big outdoor performance at the Festvial d’Été de Québec.