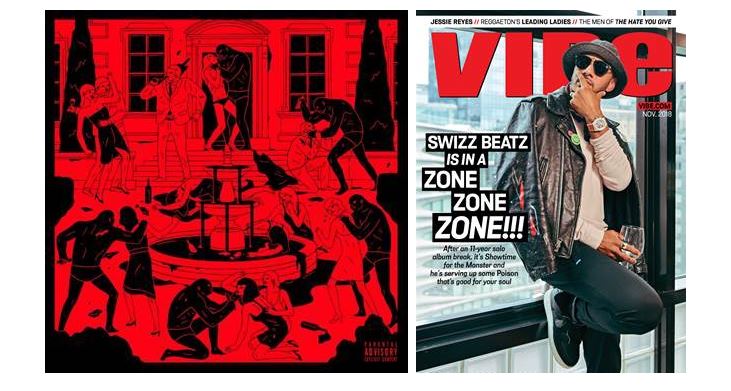 (November 2, 2018 – New York, NY) – Today, GRAMMY® Award-winning iconic producer, rapper, DJ, and entrepreneur Swizz Beatz unleashes his brand new full-length album, POISON, via Epic Records. Get it HERE. Upon going live, it claimed a spot in the Top 5 of iTunes Top Hip-Hop/Rap Albums Chart in the U.S. where it has remained since.

Executive produced by SWIZZ BEATZ and J. Cole, POISON lands as an event-worthy project. The record boasts a once-in-a-lifetime collaboration between the creator, Kendrick Lamar, Jadakiss, and Styles P entitled “SOMETHING DIRTY/PIC GOT US” in  addition to bangers such as “COLD BLOODED” [feat. Pusha T], “ECHO” [feat. Nas], and more. Check out the full tracklisting below.

In the leadup to the album, SWIZZ has made the rounds with a bevy of high-profile appearances and interviews. He allowed New York Times access to his closet for a piece about his “global style” and chopped it about all things POISON with Mass Appeal. The outlet wrote, “It isn’t just about pairing drums with snares of dancing in the back of the videos. It’s a curation process that’s earned the Yonkers native millions of dollars, more plaques than he can count on two hands, and a reputation that stretches across the seven seas.” Plus, he graces the cover of the latest issue of VIBE Magazine, out now!

Additionally, he launches a full-scale television, radio, and internet takeover! SWIZZ just appeared on REVOLT’s Drink Champs and FM’s Cipha Sounds yesterday. Today, he hits the couch at MTV’s Ridiculousness. On Monday November 5, he drops by BET and appears on MTV’s TRL before jumping into Raq Rants on BET Tuesday November 6. Rounding out a whirlwind week, he will be a very special guest on The Trevor Noah Show Thursday November 8. Be sure to tune in!

Taste POISON now. Be prepared for the next era of Swizz Beatz.

One of the most revered, respected, and renowned producers of this century, Swizz Beatz played a major role in the architecture of modern hip-hop, R&B, soul, and pop with an unbeatable discography. That arsenal of hits spans era-defining smashes such as JAY-Z’s “Jigga My N****” and the GRAMMY® winning “On To The Next One,” DMX’s“Ruff Ryders’ Anthem,” T.I.’s “Bring ‘Em Out,” Kanye West’s “Famous,” and many more. He holds the distinction of being New York University’s first “Producer In Residence.” He has graced top producer lists by everyone from The Source to About, while Kanye West dubbed him, “The best rap producer of all time.”