MÅNESKIN’S “IF I CAN DREAM” 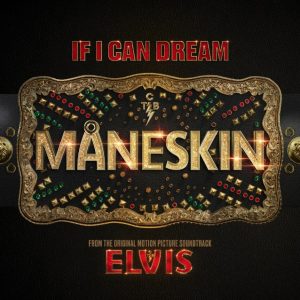 Today, House of Iona/RCA Records release Måneskin’s version of Elvis Presley’s “If I Can Dream” from the ELVIS Original Motion Picture Soundtrack –  click here to listen. The breakout global rock stars teased the track and performed a portion of it at 2022 Eurovision prior to its release today. This latest single comes with the release of Eminem & CeeLo Green’s track “The King and I” (via Interscope Records) also out now and follows the release of Austin Butler’s version of “Trouble.” The soundtrack is set to be released the same date as Baz Luhrmann’s forthcoming film ELVIS, June 24th, starring Austin Butler and Tom Hanks – the pre-save for the soundtrack is available now – click here.

Previously, Swae Lee & Diplo dropped the single “Tupelo Shuffle” featuring Gary Clark Jr. (who plays Arthur “Big Boy” Crudup in the film) and Austin Butler (who give voice to Elvis Presley on the track) – click here to listen. Named after Tupelo, Mississippi, “Tupelo Shuffle” holds great significance to both Swae Lee and Diplo as it’s not only both of their hometowns, but the hometown of Elvis Presley as well. With that special connection, this single became a notable collaboration paying homage to a place both artists share with Elvis. The pair performed the “Tupelo Shuffle” at the 2022 MTV Movie & TV Awards and Diplo debuted it during his set at iHeartRadio’s Wango Tango. This followed the release of Doja Cat’s melodic single “Vegas” – the visual for Doja’s track is out now, click here to watch.

ELVIS is an epic, big-screen spectacle from visionary filmmaker Baz Luhrmann that explores the life and music of Elvis Presley (Austin Butler) through the prism of his complicated relationship with his enigmatic manager, Colonel Tom Parker (Tom Hanks). The soundtrack features Elvis’s extraordinary body of work spanning the 1950s, `60s and `70s, while also celebrating his diverse musical influences and enduring impact on popular artists today.

Buy/Stream “If I Can Dream”: