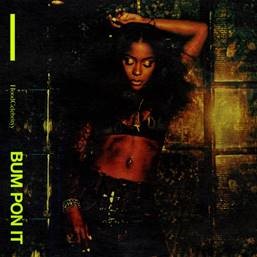 Get it HERE via KSR Group/Epic Records.

Once again, the critically acclaimed global force crosses borders and boundaries between cultures and styles and serves up an infectious international anthem. Driven by a dynamic dancehall rhythm and hummable beat, the song leaps from nimble verses into a chantable and catchy refrain. About the song, Hoodcelebrityy says, “’Bum Pon It’ is a vibe. It’s fun, it feels good. When you hear ‘Bum Pon It’ you can’t help but to keep that ass bouncing!” The Jamaica-born and Bronx-based songstress will drop a sexy, slick, and sizzling music video to accompany “Bum Pon It” very soon.

The song follows the success of her 2019 single “Inside,” which received acclaim from HotNewHipHop and Rap-Up who praised “her infectious flow, effortlessly blending hip-hop, dancehall, and pop.”

Stay tuned for more. For now “Bum Pon It” with HoodCelebrityy…

HoodCelebrityy confidently carries international style and substance to the culture. Following her emergence in 2017, she landed a hit with “Walking Trophy,” which clocked 49 million streams worldwide and counting. Meanwhile, her Inna Real Life EP boasted the official remix of the song featuring Fabolous and Trey Songz. Along the way, she garnered acclaim from The New Yorker, Rolling Stone, The Fader, and many more. Additionally, she featured on high-profile collaborations with everyone from French Montana to Estelle and Lil Kim to Machel Montano and Vybz Kartel. She adds a whole new dimension to popular music in 2019 with more music coming soon.