HAIM’S NEW ALBUM SOMETHING TO TELL YOU OUT JULY 7

HAIM’S NEW ALBUM
SOMETHING TO TELL YOU
OUT JULY 7

HAIM WILL DEBUT NEW MUSIC LIVE ON SNL ON MAY 13 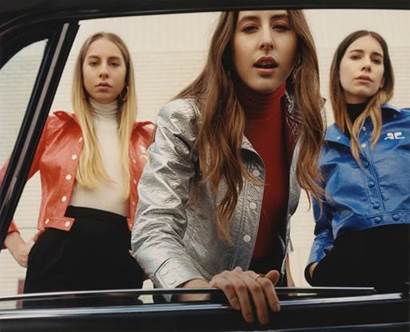 HAIM will release their sophomore album Something To Tell You globally on July 7 (Columbia Records). The announcement comes in tandem with the release of a live studio version of new song “Right Now,” the first new music from HAIM’s forthcoming album.  The song was released as a video of Este, Danielle and Alana recording the song in a studio.  Paul Thomas Anderson (Boogie Nights, Magnolia) stopped by the session and shot HAIM while they were recording.  HAIM will release the first official single from Something To Tell You on Wednesday May 3.

Last night HAIM gave family, friends and fans a sneak peek of the video at a special debut party at Canters on Fairfax.  The famed location is the site of the sisters’ first show almost 18 years earlier.  This week it was announced HAIM would return to Saturday Night Live on May 13, with Melissa McCarthy hosting.  This will mark the band’s first live performance of new music.

Heralded as one of the most anticipated albums of 2017 by Billboard, Complex, Entertainment Weekly, Pitchfork, Rolling Stone and more, HAIM’s sophomore album is the follow up to their critically acclaimed debut, Days Are Gone (Columbia Records).  Pitchfork declared it a “winning full-length debut,” Spin called it “80s Art-Pop perfection,” and NPR proclaimed, “HAIM’s thoughtful, playful music is good for the radio, good for rock, and good for music lovers of all ages who need to carve out a little space to dream.” Days Are Gone also earned the sisters a BRIT nomination for Best International Group in 2014 and a Grammy nomination for Best New Artist in 2015.

Renowned for their energetic and exciting live performances, HAIM has spent the better part of the last few years touring the globe in support of their debut album.  From performances at Coachella, Bonnaroo, Lollapalooza and Governor’s Ball to Glastonbury and T in the Park, HAIM are festival veterans.  HAIM will return to perform at the renowned Glastonbury festival this June. HAIM will also play festivals such as Splendour in the Grass in Australia, Reading & Leeds Festival in the UK, and Lost Lake Festival in Arizona with more live shows to be added.