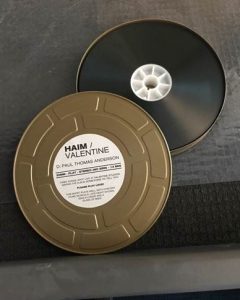 HAIM have released ‘Valentine,’ a short film shot and directed by Paul Thomas Anderson (Magnolia, There Will Be Blood). Captured in March, the film is an intimate glimpse of HAIM live in the studio playing songs from their then unreleased, critically acclaimed, sophomore album ‘Something to Tell You.’  ‘Valentine’ was shot on location at Los Angeles’ Valentine Recording Studios, a charming setting which has laid untouched and pristine since closing over 30 years ago.  Celebrated for their energetic live performances, the film showcases HAIM sisters Este, Danielle and Alana’s deft ability as musicians and multi-instrumentalists. Watch the short film here: http://smarturl.it/Haim_Valentine

Earlier this year, HAIM announced their new album’s release date along with a live studio clip of the song “Right Now.” That live video and song received rave reviews and kicked off the excitement for new music.  This clip, along with unseen performances of tracks “Something to Tell You” and “Nothing’s Wrong” are featured in the short film which was screened in New York and Los Angeles ahead of the release of ‘Something to Tell You.’ ‘Valentine’ closes with HAIM in drum circle delivering a thunderous percussive finale that fans have come to expect from their live shows.

HAIM have once again teamed up with Paul Thomas Anderson to direct the video for their new single “Little of Your Love,” the clip will be released in the coming days. HAIM recently announced a hometown show at The Greek Theater on October 19, which sold out minutes after going on sale.