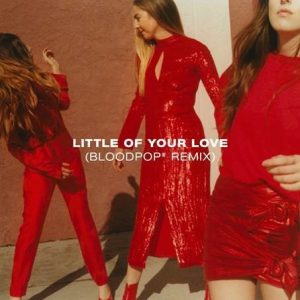 SOMETHING TO TELL YOU AVAILABLE ON VINYL AUGUST 18;

HAIM first debuted “Little Of Your Love” when they returned to Saturday Night Live in May. They then shared the “flawless” (Pitchfork) track ahead of their highly-anticipated sophomore album, Something To Tell You, which debuted at No. 7 on Billboard’s Top 200 albums chart after its release last month. Upon releasing their new album, Entertainment Weekly stated, “HAIM deliver 11 songs of expert songwriting and fine-tuned studio trickery that sharpen their jukebox classicism” and Stereogum called the album “a gleaming triumph of artisanal pop music.” The “album full of summer jams,” as W Magazine put it, will be released on vinyl next Friday, August 18th, and is available for pre-order here.

Next Saturday, the Grammy-nominated band will kick off their North American tour in Long Beach, CA at the ALT 98.7 Summer Camp Festival. HAIM will continue their tour with stops at festivals like Music Midtown in Atlanta and Life is Beautiful Festival in Las Vegas, and sold out headlining shows in Santa Barbara, Denver, Chicago and more. See below for HAIM’s tour dates and tickets for select shows are available here.

“Little of Your Love (BloodPop® Remix)” is available at all DSPs here: https://haim.lnk.to/LOYLBloodpopRemixINT