GRANDADDY REVEALS VIDEO FOR “BRUSH WITH THE WILD”

GRANDADDY REVEALS VIDEO FOR “BRUSH WITH THE WILD,”
PREMIERES VIA NPR’S FIRST WATCH

AT THE FOSTER THEATER AT THE GALLOW ARTS CENTER

Yesterday, Grandaddy revealed the video for “Brush With The Wild,” a track from their recent album Last Place, which was released this Spring on 30th Century Records/Columbia Records. The video stars actor and massive fan of the band, Jonah Ray (Mystery Science Theater 3000, The Nerdist Podcast, The Meltdown), and was directed by Aaron Beckum. Watch “Brush With The Wild” HERE.

NPR Music premiered “Brush With The Wild”, noting that with the new video, “Grandaddy finds humor in grief.” The band’s Jason Lytle adds, “I really love the way the video turned out. So funny, and scrappy. And sad, and actually kind of hopeless…but in a hopeful way.”

In a conversation with NPR, Lytle says, “I had to be convinced it was okay to tell someone that I loved them or to just let my guard down. And then, once I did, it was almost like this wild, primal thing. But it only comes in little flashes. It’s like a fish swimming through the river and every now and then it’ll turn and the light will flash off its skin and you get a glimpse of it, then it’s gone. Lightning is like that. But you get to experience it very briefly. [So] I was thinking how sad and bummed out I was finding the relationship being done [but] at least I got to experience that. I got to brush up against it.” Read the full interview HERE.

This is the first output from Grandaddy since the death of their longtime bass player Kevin Garcia in May. The band have confirmed an October 21 show in their hometown Modesto, CA at The Foster Theater at the Gallo Arts Center. The show was originally planned as a 20th anniversary celebration of their first record Under the Western Freeway, which was released on that same day in 1997. It will now serve as a celebration of Kevin Garcia.

Last Place is a perfect addition to the band’s celebrated catalog that includes their breakthrough sophomore album, Sophtware Slump, and their debut, Under the Western Freeway. It’s a symphonic swirl of lo-fi sonics and mile-high harmonies, found sounds and electronics-gone-awry mingling with perfect, power-pop guitar tones. Lytle’s voice sounds as warm and intimate as ever, giving graceful levity to the doomsday narratives that have dominated the Grandaddy output.

“After a decade-long hiatus, the band is as sure of its footing as ever.”

“Last Place is not only one of the band’s best LPs, it’s also Lytle’s most personal.” –Magnet

“It’s a gorgeous collection of songs that opens with Lytle living on the roof of a big box store and asking why he would ever move, wryly blending his personal history with surreal images of phony ecosystems. Last Place stands among the best Grandaddy records…” 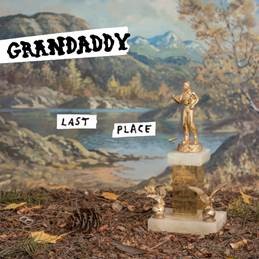