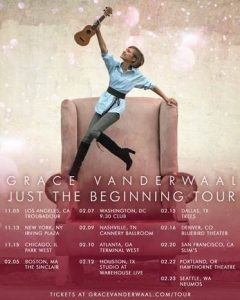 (Toronto, ON) Thirteen-year-old singer/songwriter Grace VanderWaal is set to embark on her first U.S. headlining tour this fall. The ‘Just The Beginning Tour’ starts with an already sold out show in Los Angeles on November 5 and will make stops in major cities across the U.S. including Chicago, Boston and New York City. See full list of tour dates below. For tickets and additional information please visit gracevanderwaal.com/tour.

Grace returned to the America’s Got Talent stage yesterday, nearly a full year after she was crowned the champion on Season 11, to perform her current single “Moonlight” – check out the stunning performance here. It was on America’s Got Talent where Grace first captured the hearts of America with her unique singer-songwriter talent, performing all original music using her signature ukulele. Since winning the show, Grace has experienced an incredible trajectory, releasing the best-selling EP of 2016 with Perfectly Imperfect and seeing celebrity praise from the likes of Stevie Nicks, Jason Mraz, Katy Perry, Reese Witherspoon, Shawn Mendes and Taylor Swift.

“Moonlight” has drawn over 10 million combined video views to date since its June release and also has over 7 million streams on Spotify alone. The song was praised by Billboard as the “perfect summer song,” while The New York Times noted that it “sounds like steroidal bluegrass-inflected space-pop.”

This past weekend Grace made an appearance at Teen Choice 2017 where she won the award for Choice Next Big Thing. Alongside Millie Bobby Brown and Maddie Ziegler, Grace and her peers made a hopeful statement about young teens. On Instagram, Millie noted “for me tonight was about celebrating a youthful generation with a talented singer songwriter and an incredible dancer and actor,” while Maddie added, “I’m so happy that girls like me, Millie, and Grace are not afraid to be vocal on opinions we believe in.”

In March, Grace received the 2017 Radio Disney Music Award for The Freshest – Best New Artist. She is also recognized in Variety’s Youth Impact Report 2017, the annual list of young stars — 25 years old and under —that encompasses talent from all platforms.