Gord Bamford Surpasses 3 Million in Fundraising for his Charitable Foundation 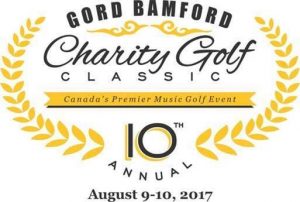 August 15th, 2017 – Lacombe, Alberta – International country music star and Sony Music Canada recording artist Gord Bamford raised a total of $393,534 at the 10th Annual Gord Bamford Charity Golf Classic in Alberta, Canada on August 9th and 10th, 2017. Meeting their fundraising goal, Gord and his committee are celebrating breaking the 3 million dollar mark with his charity­. Monies from The Gord Bamford Charitable Foundation are delivered to a variety of youth-centered charities across the country like Big Brothers and Big Sisters, MusicCounts, and Children’s Hospitals to name a few.

Sponsored by ole, Majorly Indie was a songwriters round that included Buddy Owens, Phillip White, Brice Long, and Brett Jones. On top of that, Dallas Smith and Gord himself entertained the 700+ people who attended the sold-out event. Well-known names from the sports world including Marty McSorley, Mark Recchi, Theo Fleury and Brad Gushue, just to name a few, were auctioned off to the golf teams who were given the opportunity to golf alongside their purchased celebrity the following day. Veterans of the event Kris Russel and Curtis Glencross found themselves in the celebrity auction once again.

Contributing to the fundraising total in the live auction was a trip to the Queen Charlotte Lodge which brought in $10,000, a live-painted Lewis Lavoie piece of art for $8,500, and the Calgary Flames Hockey Organization donated several experience packages that helped lift the overall fundraising total.

The Gala took place at the Sheraton Hotel in Red Deer, Alberta near the central-Alberta town where Bamford grew up and the Lacombe Golf and Country Club hosted the golfers for the 10th straight year. Gord expressed his thanks for the overwhelming support that’s been received over the past decade from sponsors, volunteers, and the music community alike. Alberta-based business JEDCO Energy Services stepped up once again as title sponsor and Central Alberta’s biggest and most well-known hockey family, the Sutter’s, showed up bearing generous donations and participated in a special hot-stove interview for VIP guests.

“These are not just sponsorships, they’re friendships,’ said Bamford during a teary-eyed, heartfelt thank-you speech about supporters past and present who’ve come out to the event. “The event raised $70,000 in its first year and was born out of the idea to hold a small golf tournament and concert in the back of a flatbed truck. “To see it grow to this size, and to know that we’re making a true difference to charities means the world to me.”

About the Gord Bamford Charitable Foundation: As a not for profit organization, The Gord Bamford Foundation is passionate about supporting youth. As a Foundation we provide funds for initiatives that include or involve music, education, health care, sports, and multi-use facilities that benefit youth across Canada.