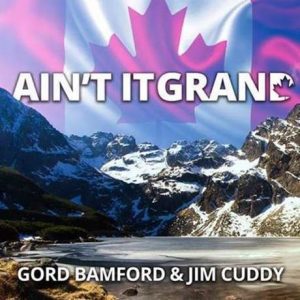 “Ain’t It Grand” Available Now for Download and Streaming 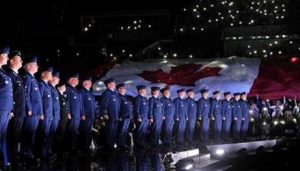 A quick conversation between Gord Bamford and Jim Cuddy while lacing up their skates for the 2017 JUNO Awards “JUNO CUP” hockey game was embryonic in setting the stage for this symbolic single. It was a quick question from Gord “Would you want to sing on one of my songs?” Cuddy’s simple response was “sure”. 3 months later a supplementary call was made and Jim Cuddy was in. What followed was the making of a single wrapped with perfect illustrations of life in Canada . The song captures Jim Cuddy’s instantly recognisable vocal nuances and pairs them perfectly with Gord’s classic country delivery.

“To sing with Jim Cuddy is surreal,” says Bamford, “If you told me when I started my career I would be singing a song with Jim Cuddy I would not have believed you. He is someone I have admired for a long time.”

Gord Bamford continuously delivers songs that strongly impact Canadian Country radio and “Ain’t It Grand” is destined to be an epic single out of the box. Look for Gord Bamford’s full length release in early 2018.

The Gord Bamford Charitable Foundation over the last ten years has raised more than $3,000,000.00 for Big Brothers Big Sisters, Make a Wish Foundation, Ronald McDonald House, Wheelchair Accessible Playgrounds & Children’s Hospitals across Canada www.gordbamfordfoundation.com. Gord Bamford raised a total of $393,534 at the 10th Annual Gord Bamford Charity Golf Classic in Alberta, Canada on August 9th and 10th, 2017. Meeting their fundraising goal, Gord and his committee are celebrating breaking the 3 million dollar mark with his charity­. Monies from The Gord Bamford Charitable Foundation are delivered to a variety of youth-centered charities across the country like Big Brothers and Big Sisters, MusicCounts, and Children’s Hospitals to name a few. On Saturday, September 9, 2017, Canadian Country Music Recording Artist Gord Bamford presented Creative Kids Saskatchewan with a substantial donation to support kids in the Province facing financial barriers to participation in arts, cultural or creative activities. As part of SIRIUSXM FanFest, Bamford took a moment from his performance to make a $2,500 donation from the Gord Bamford Foundation to Creative Kids, as well as announcing the Gord Bamford Foundation will be donating a very exciting grand prize to be raffled off in support of Creative Kids – A VIP all-expenses paid trip for two to the Beachside with Bamford concert, being held January, 2018 in Riviera Nayarit, Mexico. Second prize is an autographed by Gord Bamford acoustic guitar, donated by Long & McQuade. Coinciding with Country Music Week in Saskatoon, Canada’s music education charity MusiCounts announced on Friday September 8th that the Gord Bamford Foundation is renewing its commitment to MusiCounts with a $100,000 donation. The Foundation previously donated $100K in 2014.