EXPANSIVE 29 DATE CANADIAN TOUR FROM COAST TO COAST IN 2018 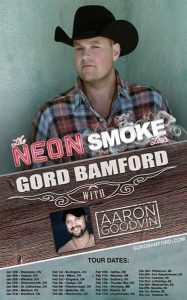 Gord Bamford continues to work toward delivering the best in country music. With 22 Top-10 singles in Canada, including the #1 smash hit ‘When Your Lips Are So Close’ from Gords’ 6th studio album “Country Junkie” Gord has a deep history of creating the songs that country music fans want to hear. 2018’s Neon Smoke continues Gords’ prolific song writing. The albums debut single, 2017’s summer anthem “Livin’ On Summertime”, broke the Top 10 on the Canadian Country music charts. The follow up single “Ain’t It Grand” saw Gord Bamford joining Blue Rodeo’s charismatic frontman Jim Cuddy to duet on this catchy, fun and ultra-Canadian gem. “Ain’t it Grand” debuted on the 2017 CCMA Award’s on September 10th, in Saskatoon and is currently racing up the country radio charts. Fans can catch new songs from Neon Smoke performed on the NEON SMOKE tour.

“Each time I set out to make a new record my goal is to make the best record of my career and stay true to what has got me to where I am today” says Bamford. “I’ve had the opportunity of a lifetime making people all over the world sing, dance, laugh, cry & love through the power of song. I shake my head every day with the thought that I actually support my family doing what I love. I have watched the business change over the years and I am proud to present my best record yet. Neon Smoke is not just a single or an EP, it’s a 16 song album that will take the listener on a musical journey.”

Gord Bamford stands as one of the most decorated artists in Canadian country music history. No stranger to praise Bamford has amassed an impressive 24 Canadian Country Music Association (CCMA) awards, multi Canadian JUNO Award nominations and is the two time winner (2013/2015) of Nashville’s Country Music Association “CMA Global Country Artist” award. Gord Bamford’s distinctive sound and song writing ability defines him as one of country music’s best neo-traditional artists. Bamford is not an overnight success. He has spent the better part of the last 20 years honing his craft, working to get where he is today. Bamford’s eighth studio album Neon Smoke is set to be released in early 2018 and follows his 7th release, 2016’s Tin Roof, the winner of the 2016 CCMA Album of The Year and nominated for the 2016 JUNO “Country Album of The Year” award. Tin Roof follows the JUNO Nominated 2013 release Country Junkie. The 3-time CCMA ‘Male Artist of the Year’ once again collaborates with distinguished songwriter/producer Phil O’Donnell (Blake Shelton, Tyler Farr, George Strait) on 2018’s Neon Smoke.

Gord Bamford on the tour:

“I want to thank each and every Gord Bamford fan that has ever bought a ticket/t- shirt/record along the way and I look forward to seeing you all and making new fans as we set out on our  2018 Cross-Canada “NEON SMOKE” Tour with special guest Aaron Goodvin.”

The Gord Bamford Charitable Foundation over the last ten years has raised more than $3,000,000.00 for Big Brothers Big Sisters, Make a Wish Foundation, Ronald McDonald House, Wheelchair Accessible Playgrounds & Children’s Hospitals across Canada www.gordbamfordfoundation.com. Gord Bamford raised a total of $393,534 at the 10th Annual Gord Bamford Charity Golf Classic in Alberta, Canada on August 9th and 10th, 2017. Meeting their fundraising goal, Gord and his committee are celebrating breaking the 3 million dollar mark with his charity­. Monies from The Gord Bamford Charitable Foundation are delivered to a variety of youth-centered charities across the country like Big Brothers and Big Sisters, MusicCounts, and Children’s Hospitals to name a few. Coinciding with Country Music Week in Saskatoon, Canada’s music education charity MusiCounts announced on Friday September 8th that the Gord Bamford Foundation is renewing its commitment to MusiCounts with a $100,000 donation. The Foundation previously donated $100K in 2014.

About Aaron Goodvin:  His debut single, “Knock On Wood,” was a Top 40 hit at Country radio in Canada and opened the door for the Top 10 follow up smash hits “Woman In Love” and the certified GOLD, “Lonely Drum.” One of the benefits of growing up in a small town is that you learn how to make your own entertainment. For Aaron Goodvin, born in the tiny town of Spirit River, Alberta, that meant joining his extended family around the campfire for sing-alongs. By the time Aaron was 18 his songwriting had matured to the point of contributing cuts to other artists. Over the years, Aaron built a local reputation as a dynamic performer with a rock solid portfolio of songs. After signing with publishing powerhouse Warner Chappell Music, Aaron scored his first major league contribution with “Out Like That” on Luke Bryan’s multi-platinum album Crash My Party. That kind of calling card gets you invited in to a lot of writing sessions, but Aaron had other ideas about his place in the music world. He set out to write and record his first solo album, enlisting the help of country music star Johnny Reid. The result was a strong collection of songs that encompasses Aaron’s life experiences and has spawned 2 top 10 single with, “Woman In Love” and “Lonely Drum” as well as a top 40 single with the first single, “Knock on Wood.” Aaron’s versatility and passion for writing and performing is second to none. Aaron has a natural ability to light up a stage, connect with his audience, and deliver a show-stopping performance, whether it’s a small intimate gathering or a crowd of thousands.