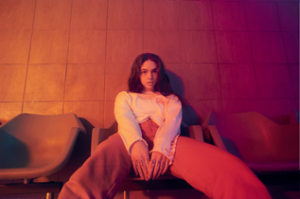 “Glowie specialises in Nineties R&B-influenced tracks akin to Dua Lipa. For her, art doesn’t always have to look nice. But it does sound really good” – The Independent

“Glowie’s music is unlike anything we’ve heard before” – MTV

“Glowie is a pop star to believe in” – Hunger TV

“If you’re a fan of pop music, [Glowie] is about to slide into your consciousness”– i-D

Glowie unapologetically tears up the rulebook on her formidable new anthem which tells the all too familiar story of how cruel kids really can be. Bullied at school for being too skinny, Glowie found herself in an unhealthy relationship with her body and a whole host of uncertainty. Today however she proudly wears all her vulnerabilities on her sleeve, harnessing Cruel as the luminary for a new empowered generation, hungry to live their lives through unparalleled and uncensored honesty.

Glowie released her debut single Body in October 2018. Written by Julia Michaels (Justin Bieber, Selena Gomez, Britney Spears et al.) the gold-plated banger arrived alongside a video featuring a diverse plethora of dancers handpicked by Glowie for their inspiring body confidence and captivating moves. And, having met US rapper Saweetie on set in LA, Glowie then released said Saweetie version to the mases, completing the package and marking an impressive arrival for the gen Z star.

Watch the video for Body HERE.

Listen to the Saweetie version of Body HERE.

Having flown the ethereal landscapes of Iceland, Glowie now lives in London where she’s set to play a plethora of live dates.

The Icelandic music scene might be full of ethereal dream weavers and local trap, but 21-year-old Glowie is heading out in her own direction. With a distinctive voice and a dark, R&B-leaning pop style, she is set to make an explosive impact on the global music scene and take her rightful place as one of the most exciting emerging artists of 2019.

About Glowie
Born, raised and based in Reykjavik, when Glowie was not in the studio or working her way around her favourite record store, the reflective millennial could usually be found in the nearby pine forests blissing out in the silence. Iceland can be an isolating place, but Glowie embraced the solitude. Bouncing between the bedrooms of her older siblings as a child gave her all the musical education she needed; Outkast, JT and Craig David with her brother, and J.Lo, Sugababes, and Destiny’s Child with her sister.

Like many of us, Glowie grew up with an uncertainty about herself and how she looked. She caught on early that it helped to channel her feelings into art. Knowing the importance of taking care of yourself both physically and mentally proud feminist Glowie is conscious of spreading not just positivity but real talk both on social media and with her music. As she proudly states on social media “Art is not supposed to look nice, it’s supposed to make you feel something…I’m tired of trying to look nice for other people and being a certain way to make people like me. This year I am not going to be flawless, I’m going to be me, happy, emotional. I will paint, sing, dance and work my ass off.”