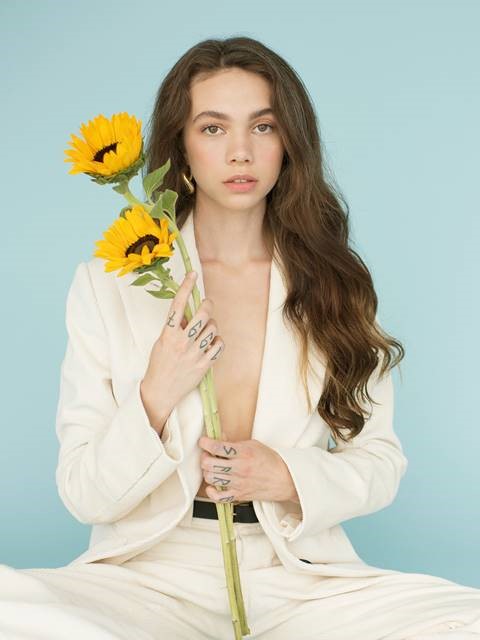 “The Icelandic singer delivers pop with a purpose” – ASOS

“Glowie is Iceland’s hottest, coolest talent and we love her. We’re talking grade A stuff” – BEAT

“Glowie specialises in Nineties R&B-influenced tracks akin to Dua Lipa. For her, art doesn’t always have to look nice. But it does sound really good” – The Independent

“Glowie’s music is unlike anything we’ve heard before” – MTV

“Glowie is a pop star to believe in” – Hunger

“If you’re a fan of pop music, [Glowie] is about to slide into your consciousness”– i-D

The EP journals a time in Glowie’s life marked full of change and adventure. You might call it a marathon of sorts, highlighted by her move from the ethereal landscapes of Iceland to the big city, where Glowie now resides and calls London her home. Perhaps for some it’s not the destination, but the journey itself that brings us joy.

Speaking about the EP Glowie said, “The last two years have been an emotional rollercoaster for me. It has been a time of experimenting with the music, trying different things and also bringing back stories from my childhood into the music. Music has always been such a big part of my life, it was always something I’d reach out to when I needed comfort and encouragement, especially in my teenage years. So I wanna do the same for others with my music, I want people to feel comfort, empowerment and love from my music. The 5 songs on this EP are all very different but they all represent something that I’ve experienced before, something that I stand for and feel very passionate about. So I’m really excited to hear how these songs will make people feel, because I bet it’s gonna be different for each person”.

Having played sets at Brighton’s Great Escape Festival last month and supported Marina at The Royal Albert Hall, Glowie has just been announced as support for Ed Sheeran’s Icelandic dates this August. More live dates will be announced real soon.

Born, raised and based in Reykjavik, when Glowie was not in the studio or working her way around her favourite record store, the reflective millennial could usually be found in the nearby pine forests blissing out in the silence. Iceland can be an isolating place, but Glowie embraced the solitude. Bouncing between the bedrooms of her older siblings as a child gave her all the musical education she needed; Outkast, JT and Craig David with her brother, and J.Lo, Sugababes, and Destiny’s Child with her sister.

Like many of us, Glowie grew up with an uncertainty about herself and how she looked. She caught on early that it helped to channel her feelings into art. Knowing the importance of taking care of yourself both physically and mentally proud feminist Glowie is conscious of spreading not just positivity but real talk both on social media and with her music.

Glowie released her debut single Body in October 2018. Written by Julia Michaels (Justin Bieber, Selena Gomez, Britney Spears et al.) the gold-plated banger arrived alongside a video featuring a diverse plethora of dancers handpicked by Glowie for their inspiring body confidence and captivating moves. And, having met US rapper Saweetie on set in LA, Glowie then released said Saweetie version to the mases, completing the package and marking an impressive arrival for the gen Z star.

Watch the video for “Body” HERE.

Her second single Cruel was penned by hitmaker and Glowie collaborator Tayla Parx (Ariana Grande, Anderson Paak, Khalid et al.). Bullied at school for being too skinny, Glowie found herself in an unhealthy relationship with her body and a whole host of uncertainty. Today however she proudly wears all her vulnerabilities on her sleeve, harnessing Cruel as the luminary for a new empowered generation, hungry to live their lives through unparalleled and uncensored honesty.

Watch the video for “Cruel” HERE