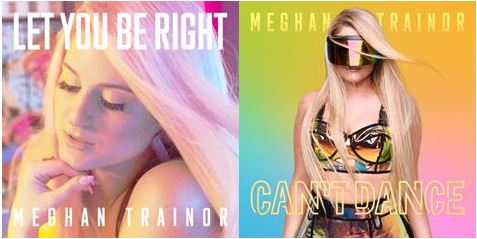 (May 10, 2018 — Los Angeles, CA) — Today, GRAMMY® Award-winning singer, songwriter, and producer Meghan Trainor releases not one, but two new songs from her forthcoming third full-length studio album. First up, she shares the sassy and sexy single “Let You Be Right” in addition to another track entitled “Can’t Dance.”

Get “Let You Be Right” HERE and “Can’t Dance” HERE via Epic Records.

Trainor says, “I was going to release just one song today, but I’m too excited so I’m giving you two!  LET’S DANCE.”

“Let You Be Right” impacts radio beginning June 4. Bright and buoyant production punctuated by funky bass and finger-snaps drives the beat before Trainor serves up a slick and sizzling chant, “I don’t wanna fight tonight. I’ma let you be right.” From the verses to the hook, it just feels “right” in every way. Meanwhile, “Can’t Dance” offers up a once-in-a-lifetime invitation to a “shy boy” in the club as she croons, “Even if you can’t dance, just hold my hips.” Powered by her seismic delivery and endless charisma, the song is a confident and catchy banger.

These tracks arrive hot on the heels of the album’s show-stopping first single “No Excuses,” which hit #1 on the U.S. and Canadian iTunes singles charts, achieved a GOLD single certification in Canada, and lit up at both Pop and Hot AC radio, where it recently broke into the top 10 and is rising in, both, U.S. and Canada.

Critics immediately adored this anthem of empowerment. People claimed, “With its confident lyrics and 80s tinged-production, ‘No Excuses’ is an instant day-brightener,” while Forbes wrote, “Meghan Trainor has crafted a stellar pop hook, she has returned to the spotlight to begin another era of her already stellar career, and has gifted the world with another pop smash.”

With more music and surprises soon, get ready for the Summer of Meghan Trainor.

Grammy-Award winning singer, songwriter, and multi-instrumentalist Meghan Trainor emerged with her 2014 breakout single “All About That Bass” and disrupted contemporary music with nostalgic pop beats and powerhouse vocals that delivered a worldwide anthem for female empowerment. Trainor cemented her rising status as one of the most prominent artists in popular music by charting seven multi-platinum singles in the U.S. and six in Canada, releasing two platinum albums, selling out three headline tours, writing multi-platinum hits for top pop and country artists, and receiving countless industry awards and nominations worldwide.  She is one of only five female artists to receive a diamond certification for her hit single “All About That Bass” which shares the RIAA Gold & Platinum Awards top honor with only 15 other singles in history. While in Canada, “All About That Bass” has been certified eight times Platinum. Earlier this year, Trainor wrapped up her first season as a panelist on FOX’s hit singing competition series THE FOUR: Battle for Stardom.