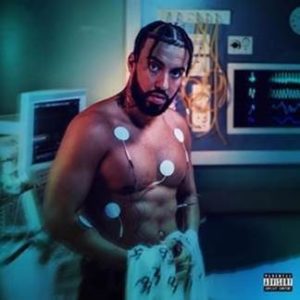 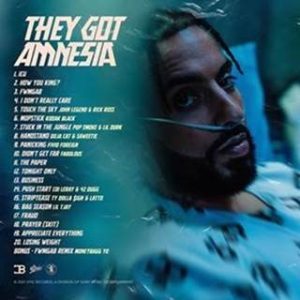 (November 19, 2021 – Los Angeles, CA) – Turning up with one of the most anticipated releases of the fall, French Montana unveils his highly anticipated fourth full-length studio album, They Got Amnesia, today via Epic Records/Bad Boy Entertainment Get the album HERE.

“This album reflects my personal journey, so it’s the most special for me,” says French Montana. “God gave me another chance at life and this music healed me. I’m grateful to my collaborators and my fans for supporting me. I had to remind ‘em, ‘cause you know THEY GOT AMNESIA!” 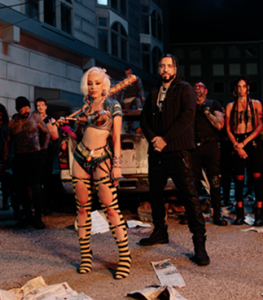 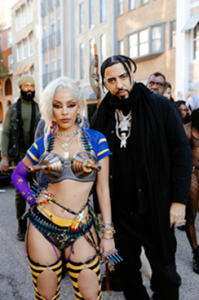 Once again, he pulled out all of the stops and delivered a collection of blockbuster anthems. The single “Handstand” with Doja Cat & Saweetie ignites an instantly twerkable refrain over slick production. The two hottest female MCs in the game tag team the beat with raunchy and raucous bars before French pulls up with a hypnotic verse of his own. Stay tuned for the official music video, directed by frequent collaborator Edgar Esteves, premiering on Monday, November 22!

They Got Amnesia, which is executive produced by Hitmaka and Rick Steele, serves as French Montana most honest and personal work of his career. It opens in the literal “ICU,” and takes listeners on a journey through redemption, detailing his story through recovery over the past several years. The record kicks into high gear with the head-nodding “How You King.” Elsewhere, “Touch The Sky” with John Legend & Rick Ross reaches the heavens with a fluttering refrain and bossed-up rhymes from Rozay. Then, there’s “Push Start,” which shines with a sizzling guest spot from Coi Leray. Serving up a sequel to his 2016 double-platinum smash “Lockjaw,” he reteams with Kodak Black for the red hot “Mopstick.” Then, there’s “Stuck In The Jungle” with Pop Smoke & Lil Durk. French links back up with the late Pop Smoke and Lil Durk for a bold banger punctuated by a catchy lyrical crossfire. The whole project concludes with the soulful and reflective “Losing Weight.” In the end, the album delivers a message to fans to appreciate life and everything that comes along with it. As a bonus, the rollercoaster concludes with an update of his summer 2021 hit “FWMGAB (Remix)” with Moneybagg Yo. Check out the full tracklisting below

French Montana also shared today a moving and cinematic a trailer to the album, detailing those real-life struggles French went through over the past two years. The short film visualizes the narrative of perseverance the album weaves throughout its 20 songs. The storyline was written by French Montana himself and directed by Edgar Esteves. Watch the trailer HERE.

They Got Amnesia serves as a reminder of French’s greatness once again. He locked and loaded the album with one banger after another punctuated by quotable bars and hard-hitting hooks. The album stands as his tightest and strongest project to-date, as he fully embraces his roots, showcasing a verbal dexterity and unpredictable flows that established him as a star in the first place. After lighting the culture on fire late last month with the announcement of the album, he kicked things off with the release of “I Don’t Really Care”,  with much chatter surrounding the song’s instantly classic music video. Earning widespread critical buzz, Rolling Stone praised it as “a swaggering single full of boasts,” and The Source touted the “instantly unshakable groove with braggadocio lines.” In addition to plugs from Complex, Revolt, and more, HYPEBEAST wrote, “the song hears the rapper drop bars about setting trends and stunting on the haters” He even had cultural tastemakers Desus & Mero talking. French continued the conversation last week with the release of “Panicking” with Fivio Foreign. Not only did it pile up over 3 million views on the music video in under seven days, but it also received plugs from Rolling Stone, UPROXX, HipHopDX, and  many more. Additionally, Complex applauded “the earworm of a hook.”  The album also boasts his summer 2021 anthem “FWMGAB,” which has clocked nearly 30 million streams thus far. Watch the “FWMGAB” video HERE.

Expanding his influence yet again, he recently announced his new collaboration with legendary perfumer Kilian Hennessy for a limited-edition spin on Angels’ Share from KILIAN Paris. French Montana worked with Kilian on all creative elements, giving the product a truly unique spin. The limited-edition Angels’ Share by Kilian – French Montana bottle has on its cap a gold-colored disk, reminiscent of an LP record, with engraved chains, nodding to Montana’s necklaces. The fragrance is currently available for purchase at sephora.com and bykilian.com. Additionally, French Montana has also announced his 2nd collaboration with luxury apparel brand Ethika. Launching tomorrow, November 20, will be the first of two pairs of limited-edition boxer underwear, with the second set to come in February. Both designs incorporate lyrics and themes found on They Got Amnesia and will be available for purchase at www.ethika.com.

About French Montana
Some artists blur genres, but French Montana blurs borders. His inimitable fusion of classic East Coast rhymes, wavy pop swagger, and international ambition elevated him to the forefront of the game on a global scale. 2017 saw him ascend to superstar status with the blockbuster smash “Unforgettable” [feat. Swae Lee], which cemented him in the “Billion Club” for streaming and earned a Diamond certification in Canada. Meanwhile, his sophomore effort, JUNGLE RULES, went platinum in Canada and dominated the charts and his 2019 album MONTANA is certified gold. He closed 2020 with the release of the long-anticipated CB5 (Coke Boys 5) mixtape, continuing a legacy he started over a decade ago. Now, he takes it to the next level with his latest effort They Got Amnesia.

At the same time, he has left an indelible mark on communities around the globe. In addition to becoming the very first rap ambassador of Global Citizen, he staunchly supported humanitarian efforts, spanning DACA, the viral Mama Hope #UNFORGETTABLE Dance Challenge, which raised over $500,000-plus, and his Pan-African health and education movement into Morocco with Care Morocco. 2018 also saw him become a U.S. Citizen after emigrating to the South Bronx from Morocco at just 13-years-old.

If anyone can not only change music, but the world at large, it’s French Montana.