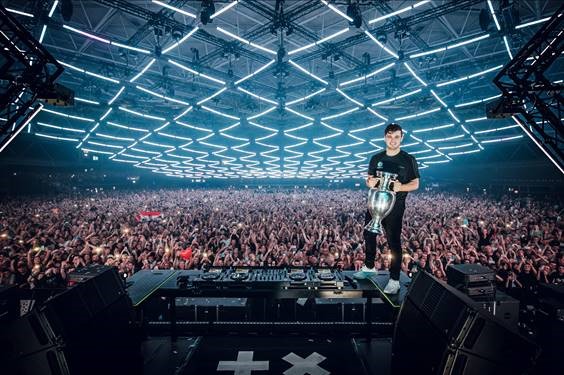 Martin Garrix will write and perform the official song for UEFA EURO 2020 after the Dutch superstar DJ and producer was announced as the tournament’s Official Music Artist in spectacular fashion at the Amsterdam Dance Event on Saturday 19 October.The 23-year-old revealed the news while performing a headline show in his home town of Amsterdam, one of the 12 host cities for next summer’s finals.

As his blinding set and dazzling lighting show thrilled the sold-out gig at Amsterdam RAI, he provided an unexpected encore by walking out with the famous Henri Delaunay Cup – the trophy that the winner of UEFA EURO 2020 will receive – as the giant screens behind him confirmed he would be the Official Music Artist of next year’s tournament.

The song will be revealed in spring 2020 – and so too a collaboration with a singer. The song will be performed in full for the first time at the UEFA EURO 2020 opening ceremony at the Olimpico in Rome on 12 June 2020.

“It’s an incredible honour to be asked to create the official song for UEFA EURO 2020 and I am so excited to let everyone hear it,” said Garrix. “Next summer’s tournament will take the fans closer to the action than ever before, and I really hope that my song will make everyone in Europe feel like they are part of it.”

Inspired by watching his fellow Dutch DJ Tiësto perform at the 2004 Olympic Games opening ceremony in Athens, Garrix has gone on to achieve worldwide success.

He has established himself as a global superstar DJ with an array of electronic pop hits such as Don’t Look Down (featuring Usher), Scared to be Lonely (featuring Dua Lipa) and In the Name of Love (featuring Bebe Rexha). Garrix has produced songs with some of the biggest names in the music industry, including Tiësto, and David Guetta, who wrote the official song for UEFA EURO 2016, and has recently collaborated with Dean Lewis for their new single Used To Love.

UEFA EURO 2020 is being held across the continent for the first time in the competition’s 60-year history, with 12 host cities in all, as part of the European Championship’s 60th anniversary celebrations. Amsterdam, Baku, Bilbao, Bucharest, Budapest, Copenhagen, Dublin, Glasgow, London, Munich, Rome and St Petersburg will all host matches next summer.

Guy-Laurent Epstein, director of marketing at UEFA, said: “UEFA EURO 2020 will be a month of celebration across Europe, and there’s no better person to get the party started than Martin Garrix. Both music and football bring people together, and with the tournament being played in 12 different countries across the continent for the first time, there will be an overriding theme of unity throughout UEFA EURO 2020.”

Martin Garrix added: “It’s crazy to think that UEFA EURO 2020 will be held across 12 different cities but it’s the perfect way to celebrate 60 years of this incredible competition. Music is my passion but I’m also a huge football fan, so it’s extra special for me to be able to create the official song for what will be the biggest EURO in history.”