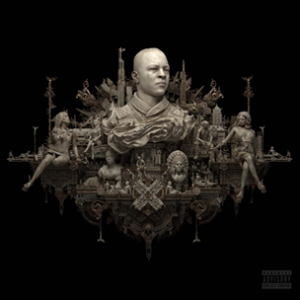 (September 28, 2018 – Atlanta, GA) Today, multi-platinum, multi-GRAMMY® Award-winning artist/producer/actor/entrepreneur Tip “T.I.” Harris announced that his tenth studio album, Dime Trap, is officially set for release on October 5, 2018, and is now available for pre-order. Earlier this week he teased the album art with a trailer featuring narration from Dave Chappelle, who will be the “voice in his head.” Along with the pre-order, a brand-new song “The Weekend (featuring Young Thug)” is now available for streaming and purchase as an instant-grat. Pre-order Dime Trap and get “The Weekend” HERE via Epic Records/Grand Hustle.

In anticipation of the announcement, T.I. gave the premiere performance of “The Weekend” last night in a medley with “Jefe” during a rousing performance on Jimmy Kimmel Live! Watch the performance HERE.

“The Weekend” follows singles “Jefe (featuring Meek Mill)” and “Wraith (featuring Yo Gotti),” which were released earlier this fall. T.I. recently shared the Day of the Dead-inspired video for “Jefe,” directed by Nathan R. Smith. Watch the video for “Jefe” HERE.

Marking 15 years since he released his breakthrough album Trap Muzik, Dime Trap finds T.I.’s career coming full circle. A curator, culture-mover, and uncompromising creative innovator, the new album once again finds him gathering only the best around him for one of the most eagerly awaited hip-hop releases of the year. The 15-track project features a bold lineup of guest artists and previous collaborators, including Anderson .Paak, Jeezy, Teyana Taylor, YFN Lucci, the above-mentioned rhyme-slingers Meek Mill and Yo Gotti, and more.  See the full track list below.

Coinciding with the release of the album, it was recently announced that T.I. has co-curated the first ever Pop-Up Trap Music Museum, set to open in Atlanta on September 30th. Along with Antwanette McLaughlin (Chief Strategist & Executive Producer of the Spice Group), Maurice Garland (renowned Hip-Hop Journalist), DL Warfield (Creative Crusader & Artist), Cam Kirk (Photographer & Videographer) and more, the museum honors and celebrates Atlanta’s thriving trap music culture. It will showcase some of trap’s most memorable moments, as well as the artists who helped bring the movement to the forefront, including T.I., Young Jeezy, Gucci Mane, 21 Savage, 2Chainz, Rick Ross, Future, and others. The museum will also feature an “Escape the Trap” room where guests will have to crack codes and follow clues to attempt to break-free from the trap house. For more information about the Trap Music Museum, visit www.TrapMusicMuseum.us.

With his new Epic Records/Grand Hustle album Dime Trap dropping next week, the fearless game-changer is once again taking his always-evolving artistic franchise to new heights.

Tip “T.I.” Harris is a GRAMMY Award-winning recording artist who has left an indelible mark on the world of music and pop culture. Having sold over 10 million albums in the US alone, Tip remains an influential figure in the world of music and entertainment. He is the founding executive of Grand Hustle Records, and the owner of two successful urban clothing brands, Akoo and Hustle Gang. In 2016, Tip became an artist-owner of the global streaming service, TIDAL, alongside Jay Z, Beyoncé, Rihanna and others. Tip’s business interests and portfolio now stretches across a variety of sectors including real estate development, lifestyle, technology, fashion and sports, to name a few.

Tip is also an actor and producer who premiered his new BET business competition series “The Grand Hustle” on July 19th, reprised his role in the Marvel sequel “Antman & The Wasp” on July 6th, and co-produced the musical drama “Glow Up” as part of the PepsiCo’s Creators League. This May, Tip and his son Domani, along with producer Cordale “Lil’ C” Quinn, received a TONY Award nomination for “Best Original Score (Music and/or Lyrics) Written for the Theatre” for SpongeBob Square Pants: The Musical.

Also widely recognized for his influence in the community, Tip has become an activist and dominant force in social issues around race relations, civil and human rights. In response to mass inequality and the murders of unarmed Black citizens, Tip began his Us or Else movement where he penned a thought-provoking series of op-Eds in the New York Times, Washington Post and Huffington Post, a socially charged album entitled Us or Else: Letter to the System, followed by a provocative short film. Using that as a platform, Tip launched a formal charitable, social justice and philanthropic arm, Harris Community Works, dedicated to driving systemic change in underserved communities. His most recent philanthropic work includes relief and support efforts for Puerto Rico, Houston, Colin Kaepernick’s Million Dollar Challenge and more. Most recently, Tip became a coveted member of the Mayor of Atlanta’s Transition Team. In this role, he will support the Mayor and City of Atlanta in policy and advocacy efforts that drive the city of Atlanta forward.