out now via Columbia Records

“His most autobiographical album to date” – Sunday Times Culture

George Ezra today releases his new album Gold Rush Kid. Including the hit singles ‘Anything For You’ and ‘Green Green Grass,’ and acclaimed new song ‘I Went Hunting’, his third full-length is available now via Columbia Records to stream, download and buy.

After two blockbuster albums – Wanted On Voyage (2014) and Staying At Tamara’s (2018), both of which reached number 1 in the UK and sold millions around the world, and the latter of which earned him his first number 1 single in ‘Shotgun’ and won him the 2019 Brit Award for British Male Solo Artist – it was time to return to heart and hearth, with an album written and produced entirely inLondon with longstanding collaborator Joel Pott.

“The Gold Rush Kid? That’s me,” says Ezra of the title of his most intimate and autobiographical record to date. “it’s a character I’m looking to embody, to remind myself how I felt throughout the process of writing and recording these songs. Coming back off all the touring for the second album, I was really struck by what it was like to be away from the people you know and love for so long. You’ve also been away from day-to-day routine, from normality. So that reconnection is something worth pursuing: go and check in with that person. But then, when you think about it, touring is also a thrill – you get to see all these amazing places.

And I realised they were two polar opposites that can’t exist at the same time – but they’re both worth pursuing! And, actually, that means you’re doing alright. Because it means that both sides of your coin are quite appealing. You might not have the balance right, at times, but they’re both worthwhile things..”

The resulting record is some of Ezra’s most personal and reflective work to date. Take the recently released ‘I Went Hunting’ for example – described by The Sunday Times as “the best thing he has done,” or ‘Love Somebody Else’ – “because I’m giving up on myself” – praised by the Guardian for its emotional lyricism and “stately and cinematic” atmospherics in their Album of the Week review.

This is simple, yearning longing, from a place of void – and of clarity. He’s the Gold Rush Kid, and he’s en route. He’s not there yet, mind,but he’s making marvelous, transporting, elevational music along the way. 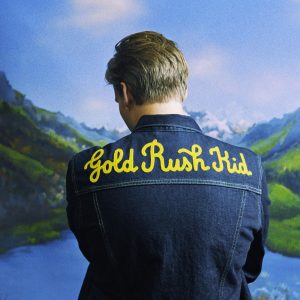 To celebrate the release of Gold Rush Kid, Ezra will play his biggest headline show to date, a special all day event at London’s Finsbury Park on 17 July 2022. Joining George will be special guests Blossoms, Holly Humberstone, Mimi Webb, The Big Moon, Mychelle and the London International Gospel Choir.

He has also announced a full nationwide UK arena tour to follow in September and October, beginning at Liverpool M&S Bank Arena on 13 September and taking in 11 shows, finishing at Sheffield Utilita Arena on 2 October. Tickets are on sale now via Ticketmaster.

George has partnered with YouTube Music to be their Sustainability Partner for 2022. The National Trust has committed to planting or establishing 20 million trees covering an area the size of Birmingham as part of their plan to become net zero by 2030. The carbon benefits from the 17,000 trees will go towards the charity’s own net zero ambitions.