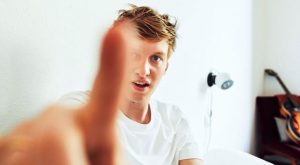 (London – June 16, 2017) – George Ezra, one of the biggest selling male artists of the decade, today makes his eagerly anticipated return with his first new single since the release of his record-breaking debut album Wanted On Voyage in 2014. ‘Don’t Matter Now’ was this evening premiered as Annie Mac’s Hottest Record in the World on her BBC Radio 1 show, and is available to stream and download now via Columbia Records, alongside its technicolour video, directed by Marc Oller on location in Barcelona, and starring Ezra and Mary the dog.

“I wrote Don’t Matter Now to remind myself, primarily, that it’s okay to want to take yourself away from situations from time to time,” says Ezra. “It was one of the first new songs I wrote after Wanted On Voyage, all the way back in sunny 2015. Events from back then can seem quite trivial at this point, but the song has made more sense to me as time has gone on. In time I realised that it wasn’t just me that was suffering from anxiety, it wasn’t just me that was confused, and that there’s no harm in not always understanding what’s going on in the world around you.

Wanted On Voyage was last month certified 4x platinum in the UK, and was amongst the top 10 biggest selling artist albums in this country in both 2014 and 2015, reaching #1 in the Official UK Chart and spending 122 weeks in the chart overall. In little more than 18 months Ezra went from virtual unknown to one of the international breakthrough artists of recent times: taking in a top 10 album in 10 countries; three sold out UK tours; nominations for four BRITs, one BBC Music Award and an Ivor Novello.

Since finishing the extensive Wanted on Voyage world tour in December 2015 – playing to more than one million people in 18 months – Ezra has kept a low profile. He resurfaced last month for a sold out, tongue-in-cheek-titled ‘TOP SECRET Tour’, a two week jaunt of intimate venues around the UK and Ireland that kicked off in Belfast on 26 May and wrapped up with a performance at Bath Forum on 7 June, swiftly followed by performances at Wild Life, Parklife and the Isle of Wight Festival last weekend. He returns to Glastonbury Festival later this month, and will play select European festivals throughout the summer, including TRNSMT Festival in Glasgow and V Festival. Visit georgeezra.com for the full list of dates.