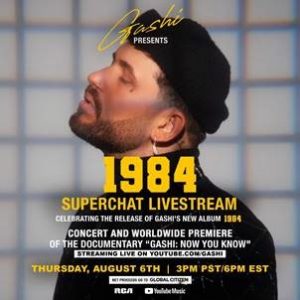 LISTEN TO OTHER TRACKS FROM 1984

In celebration of the release of Gashi’s highly anticipated sophomore album 1984, Gashi presents a one-of-a-kind livestream in collaboration with YouTube this Thursday on Gashi’s Official Artist Channel.  The 1 hour event will feature the first livestream performance from Gashi ever as well as the worldwide premiere of his documentary “Gashi: Now You Know.”  The livestream will take place on Thursday, August 6th at 3:00PM PST/6:00PM EST at youtube.com/gashi.  Net proceeds raised during the livestream event will be donated by Gashi to Global Citizen.

On Friday, August 7th, Gashi will release his sophomore album, 1984 via RCA Records.  The 16-track 1984 album sees GASHI exploring and harboring new sounds that will bring you back to GASHI’s favorite time – the 80’s and features already released tracks, “Paranoid,” “Mr. Ferrari,” “Upset” ft. Pink Sweat$ and Njomza and “Lies.”  A special collaboration with Sting on the track “Mama” will also be featured on the album.

Born in Libya, GASHI spent much of his young life as a refugee, moving from country to country.  His family eventually settled in Brooklyn, NY, where he was introduced to music at a very young age.  GASHI absorbed a melting pot of musical influences throughout his youth, resulting in the formation of his own unique sonic palette that blends together different genres of music.  His dynamic sound has allowed GASHI to collaborate with a wide range of talents ranging from Chris Brown to Travis Scott.  In the last couple of years, he released his self-titled debut album, sold out venues all across the globe, and has accumulated nearly 550 million streams with over 90 million video views worldwide.