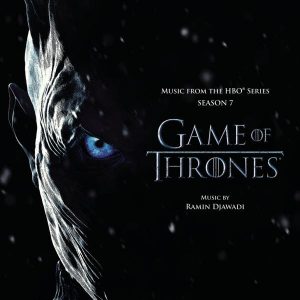 When asked about the soundtrack, Djawadi, who earlier this year helmed the successful Game of Thrones Live Concert Experience Featuring Ramin Djawadi tour across the United States and Canada, said “Winter is finally here and so is the music – a blend of ice and fire, sweeping emotions, and epic battles. Rediscover themes, the old and the new.”

About Game of Thrones:
Based on George R.R. Martin’s fantasy book series A Song Of Ice and Fire, the Emmy® Award-winning drama series Game of Thrones follows kings and queens, knights and renegades, liars and noblemen who are engaged in a deadly cat-and-mouse game for control of the Seven Kingdoms of Westeros. The epic series’ storylines of treachery and nobility, family and honor, ambition and love, and death and survival have captured the imagination of fans globally and made it one of the most popular shows on television. The series recently broke HBO ratings records, averaging more than 19 million viewers throughout season 4. In 2014, Game of Thrones was the most searched TV show on Google and the #1 most talked about show on Facebook.

About HBO Global Licensing:
HBO Global Licensing officially licenses the HBO® brand for the development and merchandising of innovative product lines inspired by the network’s award-winning programming. With products created around hit series like Game of Thrones® and True Blood® as well as classic series like The Sopranos®, Sex and the City®, and Entourage, items include fashion apparel, figures, jewelry, digital and CD soundtracks, prop and costume replicas, games, books, and beverages, as well as exclusive, premium collections in partnership with upscale, designer brands. Merchandise can be purchased in retail stores nationwide, at http://store.hbo.com, and at the groundbreaking HBO retail hub, the HBO Shop®, located at 42nd and 6th Avenue in New York City. HBO Global Licensing products are also sold internationally across Europe (www.hboshopeu.com), Asia and Australia.

The track list of Game of Thrones (Music from the HBO® Series) Season 7 is as follows: